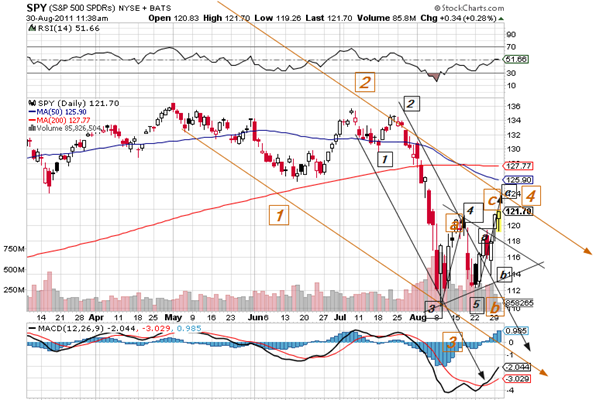 We can forget about the triangle idea. Instead we either had a failed 5th and an a-b-c from there or the entire thing from the lows of Aug 8 is an a-b-c. 124 would be a rough target. I guess we missed all the good news.

1 Confidence in the US dropped to 44

2 It did something similar in Germany earlier this week and also in England today.

3 There is a legal question with regard to the legitimacy of bond purchases in the ECB (to be resolved Sept.7) that , together with the political untenable position of Mrs. Merkel assures, that the trillion or so euros needed to bail out the system will not be forthcoming.

4 Irene’s damage is minimal compared to the hyped billings but it is still 10 bln.  or so more than before.

6 The new head of the IMF insists that the banks need to get more capital, now. Mr Trichet is equally optimistic with his remarks that the system is shakier than ever.

7 The Fed just confessed that they are impotent, leaving only the administration to work things out.

And so on and so forth.  What is there not to like? Maybe it is just month end.