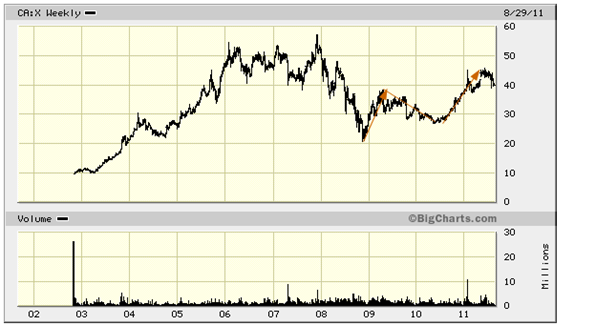 The Exchange presently trades a little under $40, against a bid of $50 by Maple. Clearly expectations are not high that this will best regulatory approval. If combined with Alpha, as is the intention , the new entity would control upwards of 80% of all trading , a level that will be seen to be monopolistic and uncompetitive . The big surprise is that not everybody believes this. We have consistently advised getting out of the stock. The a-b-c pattern does not bode well for the immediate future. Looking at some of the others, the LSE the first suitor, and Deutsche Börse, itself involved with a failed bid, is not promising either.; 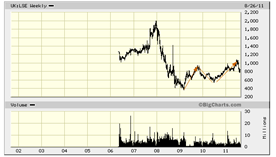 Whereas X trades at about 70% of it’s peak value, the LSE is at about 40% and the DB at less than 25%. In the event of a merger these fractions presumable will also merge leaving only downside for the TMX.