We all know that the Fed. was created in the middle of a dark night off the coast of the Carolinas in 1913 or so. It is not a government agency as just about everyone wants to believe. It is more a quasi partnership between banks of different nationalities to save the world, after saving themselves.

The market, supposedly is looking forward to whatever rabbit will be pulled out of the hat at Friday’s Jackson Hole conference. Last time it was QE2, might it be QE3 this time ? Apparently it is not yet abundantly clear to the vast majority that “pushing on a string” or bringing the proverbial horse to water does not matter if the beast does not want to play ball. Even so hope is eternal and the market seems to know that there will be a rabbit, no matter how small.

In the mean time the San Francisco Fed (there are 12 of these) did a research study that was pretty well ignored, at least the impact was less visible than the earthquake. Here is that study in short; 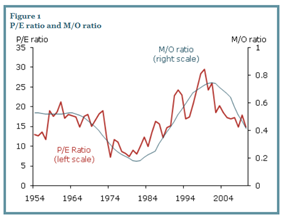 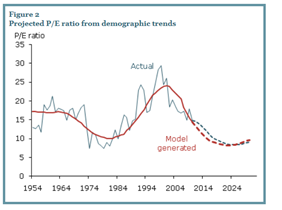 They, the research guys at the SF Fed found a correlation between age and investment behavior. Nothing new, we had that here with Foot and others already. But here is the point, they expect with a high degree a statistical credibility ( a lovely 61% correlation for Fibo  believers) in support of their conclusion that stocks should trade at a P/E of about 8 or so in 5 to 10 years. We are at 14 now so the Fed is telling you stocks might drop by 1/2. So much for QE3 or the next rabbit.

The M/O ratio is the fraction of people between 60 and 69 that own most stocks and are about to retire. More at the website SFFRB.