Goldman Sachs, Deutsche Bank and our own Royal Bank. Of course it is debatable whether or not GS is in fact a bank or just a bank of convenience, but all three are very prominent in their respective communities and are both very visible and influential . The RY is actually the largest at a cap. of 72 bln and pays the best dividend yield at 4.41% and has a p/e of 13+.  For GS the numbers are 57 bln. , 1.25% yield and a p/e of 8.5 . Deutsche is the smallest at 37 bln, pays 2.76% and trades at a p/e of 10.2. Here are the three charts.

From 2002 to 2007 they all roughly triple in value. Then they all crash right back to that starting point or a little below. Then we get the rebound with RY having the most powerful advance of all , even making  new highs. GS and DB start dropping immediately but the Royal actually makes a second high (does not show properly on this chart, but the second high is $0.30 or so higher). Then all three start breaking down. Together they look like this. 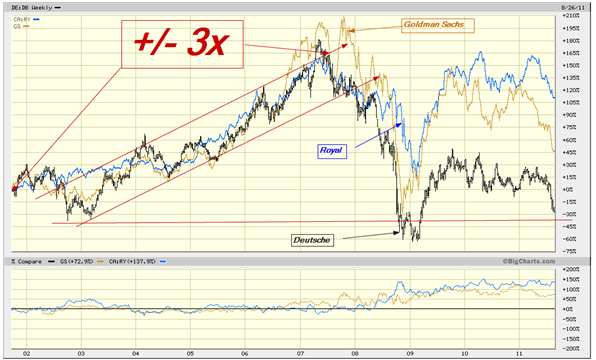 Santander, STD, the Spanish big boy I have left out, it gets too messy otherwise, but it fits in between Deutsche and Goldman. There are some conclusions that might be drawn from these charts. First it does not matter much what regulations were put on the books or taken off. It clearly helps to have political clout something presumable GS excels in but the others are not that far behind , I am sure. So the moral of the story is they are all going lower, given the pattern, and that suggests that RY is royally overvalued.