This is another one of Canada’s independent investment-dealer boutiques. It has about 400 employees and a market cap. of about 1/2 bln. These companies are extremely inventive and creative but there have been times in the past that that just was not enough. Without the big bank umbrellas and their nickel and diming one’s existence can become quite binary in very short order. Here are the charts; 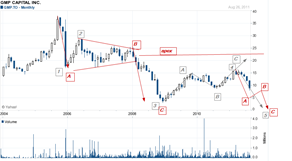 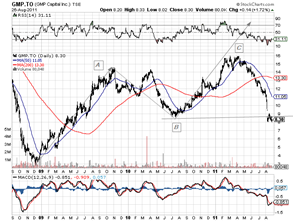 As always, click on the chart to enlarge. From a high around $38 in 2006 it started its fall rapidly and then moved sideways for a while only to join the rest of the world by diving to about $4, for a total of about 90%. The rebound from that point followed the , more or less, standard pattern  except that GMP was significantly weaker! It did not make to the , roughly, $20/21 level that one might have hoped for. This is normally a warning that things could deteriorate faster than usual. Two EW counts are possible but both are immediately bearish. The stock has now dropped below the B level of the rise from the Dec. 2008 lows and appears to have gapped recently. If the gap is in the middle, as is often the case, $2 is not out of the question, and that would be a loss of again almost 90%.