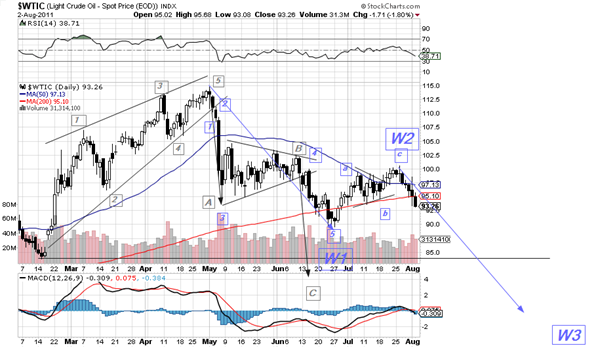 Once oil (West Texas) had peaked around $115 a barrel, the wedge shaped structure that had propelled it there almost promised that it would come back to, at least, $84. Moreover it should do it quite rapidly. It did to about $95 and then it started oscillating for more than a month roughly around the $100 level, a nice triangle for sure. What was not clear is whether it was a B or a 4th wave triangle. It’s size, relative to the preceding drop suggested a B-wave. As in an A-B-C drop the C is often equal to the A, that gave a target of $82 or so (see black annotations). Problem is, it never got there and instead only barely flirted with the $90 level. This fit a 5-wave count much better (light blue). It also called for a return to about the level of the apex. This invariable happens with 4th wave triangles but not necessarily with B-wave triangles. The formation once again of another, much smaller, triangle more or less confirmed what was going on. The end result is that the outlook for oil is now far more bearish than it was originally. 5-waves in any direction never stand alone. We should now get at least one more set down to about $78, more likely a more prolonged move with more than just one more leg. Time will tell.