This company provides a good cross section of the US economy. First of all it is big. Like UPX it has a fleet of aircraft second only to the pentagon, and they use theirs all the time burning more jet fuel than anyone else. Also they transport huge quantities of finished or semi-finished goods, those that due to their value can bear the cost of freight. In this sense they have their finger on the US pulse. It used to be what is good for GM is good for the US, that is now China and the adage should really be , what is good for Fedex is good for the US. Here are the charts; 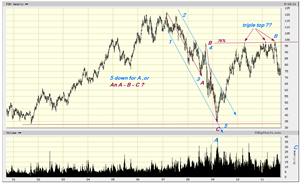 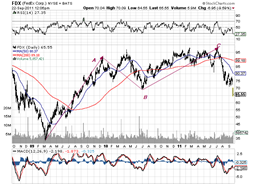 The stock got pounded in the 2008/2009 great recession and bottomed perfectly in synch with the rest of the world of stocks. The way down is debatable with respect to whether or not it is a 5-wave sequence or an A-B-C. For the moment it is immaterial. The rebound was more robust reaching about 76% ( a Fibo ratio ) and , at least on the monthly chart , triple-topped, a dead give-away for trouble ahead. 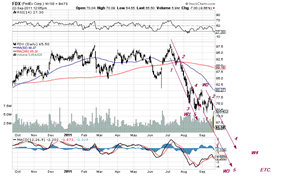 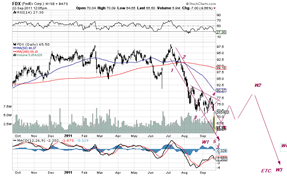 And that we got, down 35% in little more than 2 months! The question now is how does it continue? We have already surpassed the B-wave level, usually the first target. The count allows for two scenarios (my charts are not detailed enough to distinguish them properly). These two scenarios apply to many other stocks as well!

The one on the right is where we will complete wave 1 down soon. Wave 2 would then take , say two months and frustrate both bulls and bears. In this instance a small triangle is assumed as wave 4 of 3, today’s action, including the gap, is much , perhaps even all of wave 5.

The one on the left assumes that wave one was complete sometime in August and the action since then was a small 1 and 2 and we started 3 a few days ago. In this scenario the stock will continue to drop without much of a pause. This is why, as mentioned earlier (see DAX) it is very dangerous to play short term rebounds. You may find yourself under water much faster than you bargained for. First target now would be around $50 and then below $35.Not good for the US!