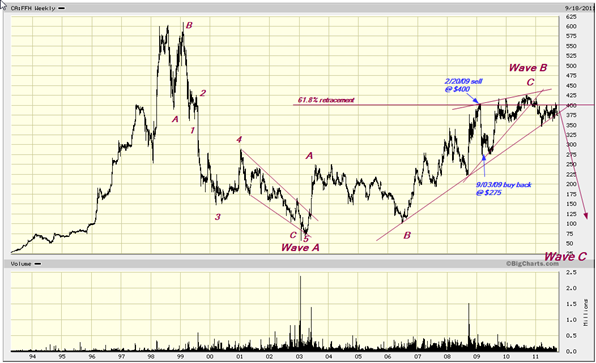 Almost 3 years ago we got lucky with this stock by recommending a sell at $400 (about 61.8% retracement) and buying back at $275 a month later. We prefer to be smart but will take luck any time. Since then the stock has spent 2 to 3 years doing relatively little, the amber light was on and there was nothing more to say. Only once before has this stock spent so much time doing so little (‘03 to ‘06), so, like a volcano , it may come to life at any moment, most likely to the downside! It has been hugging the lower boundary line for almost a year now and has done what it should in terms of retracement. Time to get out or at the very least put in a stop at about $375.

This company is run buy  very smart management (Mr. Watsa) , known for their willingness to contemplate the bear side which would normally work in their favour. But they are also an insurance company and as such are experiencing difficult times due to low returns on investments. According to statements made by Mr. Watsa they now fear a deflationary environment and are also concerned about a Fed. that has effectively made itself irrelevant due to no more ammo and, are very concerned about the Chinese real estate bubble. So the stock could actually go up but for the moment the risk seems to be to the downside.