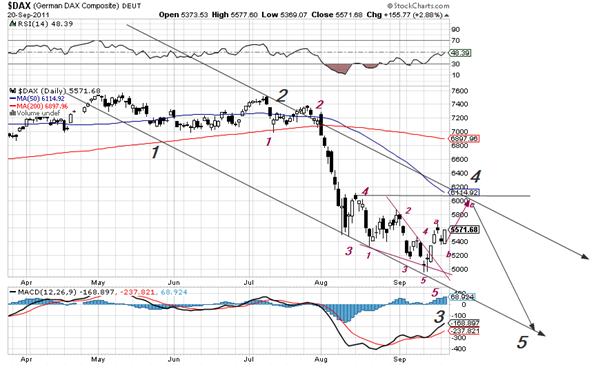 The DAX and so many other indexes have been more or less suspended for the past week or two while we await the outcome of the Greek implosion and the American deficit reduction and jobs bill progress. These things always take longer if you are waiting for the outcome. With this in mind an earlier thought with respect to the DAX keeps resurfacing.

The drop of roughly 2600 points from the may high to the Sept low is not over , but we may just get a slightly bigger rebound. The 5th wave of 3 appears to have been a wedge, which normally retraces entirely. This could mean that the present wave 4 could go another leg higher. A 40% retracement of wave 3 would require about 1000 points and this would equate nicely with the start of the wedge , the upper channel line and the 50-day moving average.

After that, as discussed, wave 5 could be precipitous or just wave 5 of 1.