Netflix was clearly, and without a doubt , in a bubble early this year. The problem is, like Keynes said, the market can stay at ridiculous levels longer than you can stay solvent. However, EW gives you some certainty even in the event that you might be too early, which invariable happens when using common sense when the market does not. Here are the charts then and now; 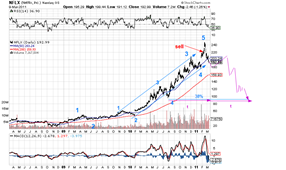 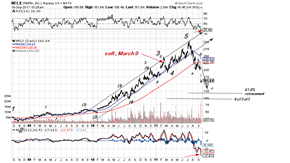 You may miss count a wave or two but in the end , after 5 waves are done the stock typically drops 62% or to the 4th wave, either of the entire sequence of of wave 3 itself! This is invariable a lot lower than where you sell short. This is not to say that it might not be a good idea to get out every now and than, provided you keep getting back in at higher levels. Fundamentally there never was any justification for this stock to trade at above $100 , let alone at $300.

In any event we were clearly too early with our recommendation to sell at around $225. But even if you had, and even without getting in and out, you would today be up nearly 30% in half a year. The stock should go lower yet. 62% is just under $125, the 4th of 3 is around $100. c=b of this zig-zag in progress at around $125. So $125 seems to be a reasonable target for the downside, initially. After the dust settles much lower levels could be reached.