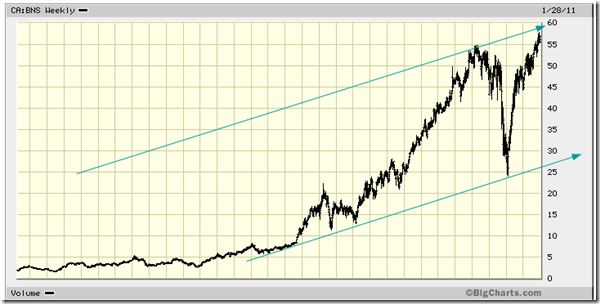 Just a quick reminder that this is the long-term picture for BNS, the high was roughly at $60 in Jan. of this year. Here is where we are today; 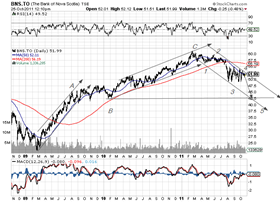 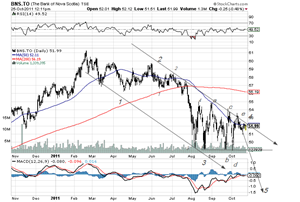 That $60 was pretty well the top, it reached $61+ in February, a nice Fibo number. From the lows (chart on the left) the stock traced out a well recognizable B-wave that marginally exceeded the previous top in 2008. The two separate legs up are relatively clear and roughly travel the same vertical distance.

From the highs the pattern is not perfectly clear, but if we assume a wave 1 type 2 wedge (don’t ask!) at the top, we could have a 1-2-3-4 wave 5 still to go. The stock moves up and down 7 times without going anywhere. This best “fits” with a wave 4. Also the initial target, the b-wave level in the larger B-wave  (arguable at $42.50) has not yet been reached.

Banks have recently come under greater scrutiny that normal. On BNN there were one or two speakers that opined that Canadian banks were over valued and should be avoided, something unheard of in Canada. Perhaps the notion that banking is not going to be that easy with Basel 3, the Volcker rule , Dodd-Frank, and the 99% occupy Wall/ Bay or whatever street, a flat yield curve and whatever else. The idea that European bondholders, read banks, should shoulder a larger part of the losses may weigh on banking worldwide.

If this is a wave 4 triangle we should start moving down soon. The alternative is that wave 1 and 2 are complete in which case we will go down even faster and further in wave 3.