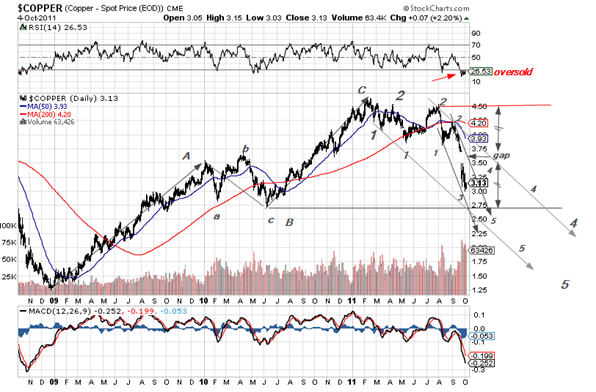 Copper is approaching the B-wave level at $2.75. The wave count as shown may or may not be correct but this is the first “logical” level for a retracement. The gap in the middle (of wave 3) calls for about the same level for the end of 3. If it gets there or not remains to be seen but yesterday Teck-Cominco was up 8% and even if that is not the end such large moves occur close to the (intermediate) end. This action should be reflected and amplified in the Hor.Beta Pro HMU (up) and HMD (down) leveraged base metals ETF-s; 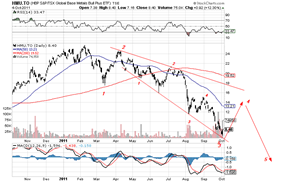 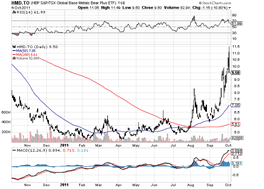 The pair should, very roughly cancel each out as when one goes up the other goes down. If you own both, have a chat with your broker because, as is all to often the case, he is the only sure winner. Again the counts are not perfectly clear but it would seem that we may have a period of weeks during which this oversold and overbought condition needs to dissipate. If you owned TCK, Inmet, Lundin, Kinross , even the oils this HMD is an excellent hedge, or would have been at up about 3x. Now might be the time to buy the HMU, the potential to $15 is certainly there which would be a 78% gain from yesterdays close of $8.40. Even if a little early, and assuming some slippage, it would still be a nice trade. 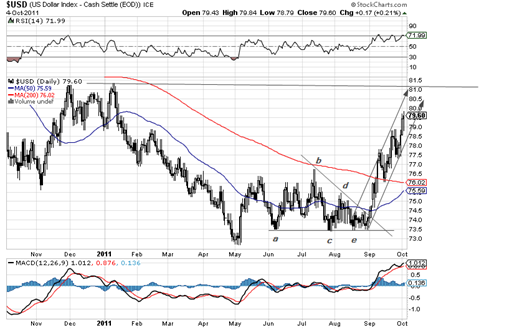 The US$ Index is within a point of hitting something big. In this macro-economic risk on risk-off world we now seem to live in, a dollar that goes sideways or , perhaps, down soon is a perfect backdrop to the base metals going up and with the world concentrated on Europe the bad news, it there is any, from China will not be heard.