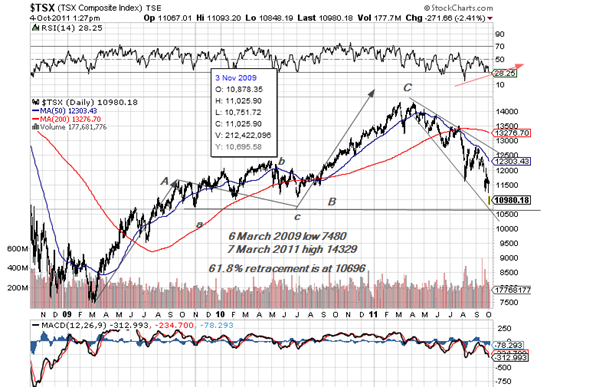 Two weeks or so ago we did this for the DAX, and came up with the number 5100. It went through there once or twice by a hundred points or so and went above it by 500 points but as we speak that was a pretty accurate call. Doing the same for the TSE we would suggest 10700 as the number. We have no idea what the count is but there are 9 legs down from the second top. It looks a lot like the DOW or S&P during the tech crash, a cascading waterfall. See chart below; 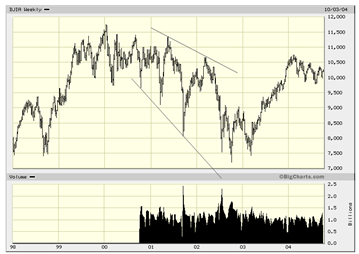 10700 is pretty well the base of the B-wave on the way up (stylized). It is also the point where the 61.85 Fibonacci retracement of the rally from the lows occurs. The RSI is already non-conforming by moving up.  Add to this that the HXD just hit an upper trend-line; 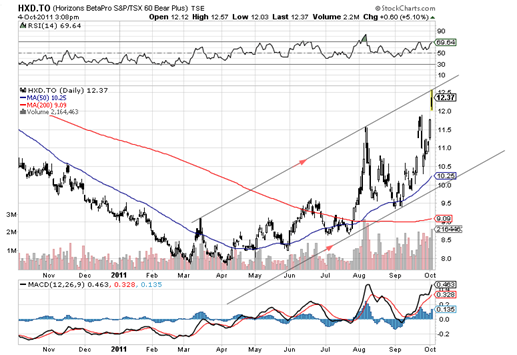 As you know, this has been my “top pick” for some time now and certainly from the $8 level where it was the exact inverse of the HXU. You may want to step aside for a moment, then again maybe not, depends on how nimble you are. This one is up 56% from the lows and has proven to be a good trading instrument or hedge.

We are nowhere near the ultimate lows but we may just get a little pause for a month or two and this might be tradeable even if you run the risk of missing the boat.