Never know which is which, sometimes only the derivatives are available on the charting system. One would think that when the world is looking to China to be the savior of our economic system , first by providing cheap goods, then by providing the cash that allows us to maintain low interest rates and then by providing the bailout money to keep things going, that some of this would rub off on the local stock markets as it does on Toronto’s condo market where most units (70+%) are presold to overseas buyers sight unseen , should be expected. Not so, here is the DJSH, then and now; 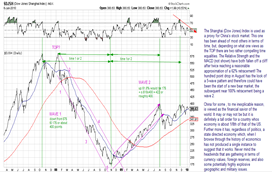 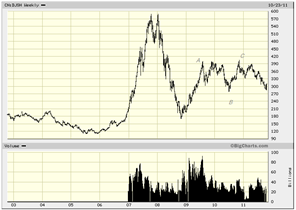 On the left comments from early January of 2011 anticipating a drop. On the right what happened. It did drop but then came back to finish the A-B-C. Now it is dropping for real and at roughly 300 it is trading at about 1/2 of it’s peak value. Not all that impressive for a country that has a fiat currency and a fiat banking system and recently added liquidity to the tune of about 1/2 of GDP. The Hang Seng is even worse; 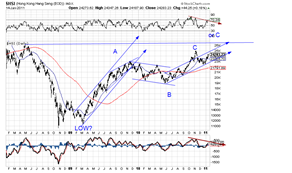 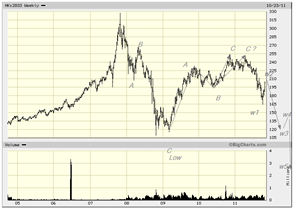 The Hang Seng index (Hong Kong), predictable collapsed once the large B-wave correction was complete. At the recent 165 low it was trading at 1/2 of the peak value in late 2007, much worse than the Dow Jones Industrials or the S&P. In detail, it looks a great deal like the copper stocks and the European indices; 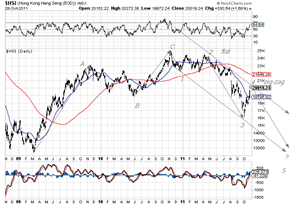 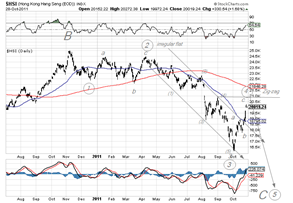 Notice that overlap is a long way away, that the Oct. correction is a clear as a bell a-b-c with just a little more to go before c=a. None of this bodes well.