The common thread between these four items is, of course, copper the metal. What I will try to do is come up with an average so to speak as there are a number of conflicting elements here. First IMN, several times in the past we called for a drop to around $47.5 or so long before it was even close. The basis for this was an apparent triangle forming. Here are the then and now charts; 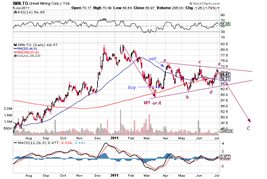 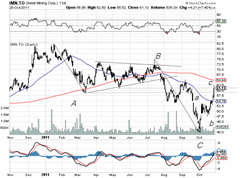 Triangles are always either waves 4 or B. Well before we got here I had to conclude that the triangle was probable wrong, but I maintained the target (see previous blogs). The stock dropped nicely to $40, in hindsight the proper target as it represents the pause area on the way up. Of course the $40 level would have been a buy but i was not paying attention. Since then, Oct.4 the stock has bounced an incredible $22.50, well over 50%. This causes overlap for a number of counts that are not shown and leaves us with a simple A-B-C. These can be repeated 3x so this is not necessarily bullish long-term.

I got FCX wrong thinking that it could drop further. It did not. Just like Inmet and the others the stock rebounded from that same pause level; 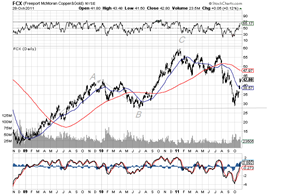 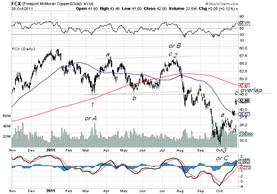 Freeport does much the same as Inmet but clearly there definitely is no triangle. This leaves a 1-2-3 and now 4, or a 1-2, 1-2 , 3 , and now 4, or a simple A-B-C. Overlap occurs at $45 for the first two counts. It looks like the stock wants to go to $48 (causing overlap). The rebound looks like an a-b-c but the c wave already has two gaps in it. If this happens the A-B-C interpretation will prevail as the most credible.

Copper, the metal has behaved in a similar fashion except that it was relatively stronger than the stocks,it did not fall as much; 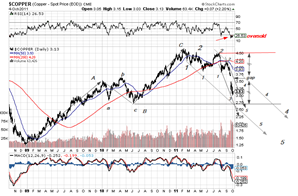 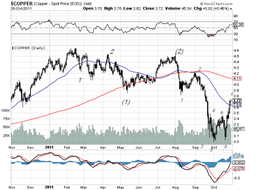 On the left the Oct 4 expectation, proven to be wrong immediately as that day was the low. Overlap will occur at about 3.85 and 4.11 respectively. Copper is up 25% from the lows, obviously lagging the stocks by a wide margin. Here again the count is anything but clear even if all possibilities are still open. 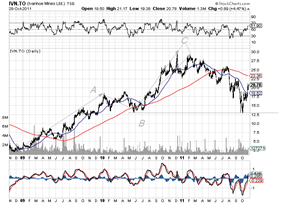 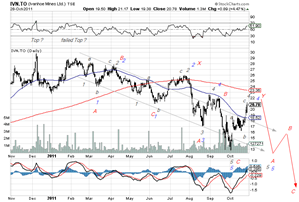 Ivanhoe  has a virtually identical pattern , dropping precisely to the pause level of $13 which I thought of as an extreme. Where it differs is that it has two tops which makes things rather messy. Starting from the February top the patterns are pretty much the same. I am fundamentally bullish on IVN but the rebound from the lows of Oct 4 looks decidedly corrective just like all the other ones. Overlap occurs at first $23 and then $24, but neither excludes a continuation of the bear if this turns out to be an A-B-C X A-B-C Y A-B-C. Therefore stop-loss levels should be used un till this clears up. The stock is already up from $13 to almost $21, more than 50%.