One of the few left standing. It is smaller than GS but famous for it’s bond trading capabilities. It looks like it is a death spiral, just like Goldman, but the chart actually looks rather promising; 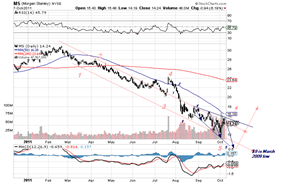 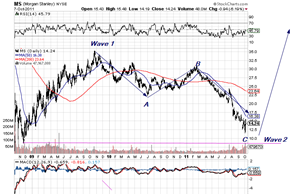 First of all, there appears to be a 5 wave down sequence as should be expected from all C waves. If it is or is not complete, is a different matter. The lows of March 2009 were at around $9 and so far we have gotten below $12 already. We know that at $10 or below there will be a lot of buyers so something is bound to happen around that level. The most interesting part is that the 5th wave of wave 5 seems to be developing as an expanding diagonal triangle, which , in English, is a wedge that has ever increasing swings in the 3 down legs and two up legs that it should have. It is an exhaustion pattern, meaning things have gone too far too fast. It only occurs as the last wave in a sequence and virtually always is retraced in full, in this case that equates to $18. Furthermore it does this fast!

The question that remains, is this wedge complete. The simple answer is maybe, maybe not. To play it safe lets assume it is not complete in which case one more dive to roughly $10 is still in the cards. If you buy it there you could make an 80% return in a matter of months. Use options if that fits better.

At the time the stock had already dropped to around $20. It has gone further than expected but the pattern is still perfectly valid (as perhaps with GE)

PS. It could be that this stock goes to zero, but we would still have to get a wave 4 and then 5. This “wedge” would then be at the end of wave 3 as it has to be at the end of something. Given that wave 3 by that time will be from $30 to $10, a retracement to $18 would still occur as wave 4. So provided you sell at $18 things should work. If the stock does not get to $10 and rises from here, al you have lost is an opportunity.