Both these banks are outside the mainstream, one because it is primarily Quebec based and therefore less Anglo so to speak and the other because it chooses to do what the others will not do, that is extend credit without a lien on the first born, mom & pops cosigning and a collateral coverage of at least 3x. Perhaps the resulting charts could better reveal where we are; 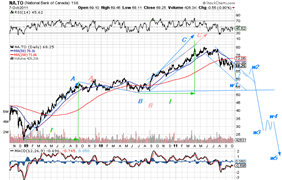 In the big picture National Bank probable topped at the first top, in purple. But even if it is the second top, in blue, one more down leg could still be in the cards. So far we still have a good way to go to reach the initial target of about $53 (the B-wave level within the larger B-wave). 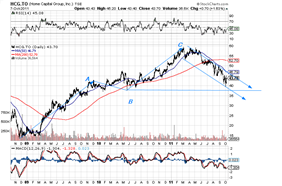 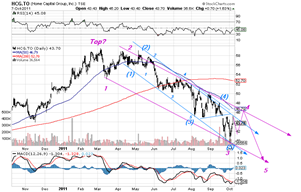 Home Capital is behaving a little better in that it is already much closer to the first initial target of about $37. Also it has a far narrower channel adding credibility to the count. A single additional wave down could complete the first move, but this one could already be complete! If wave 3 (in blue) is shortend, waves 3 and 4 in blue would become 3 and 4 in purple and the first 5 down would be complete. All the other banks have equally mixed signals so buy only at the bottom if it occurs close to the b-wave level.