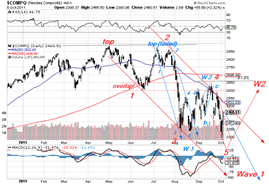 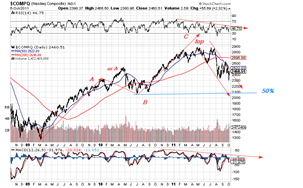 Just to belabor the point, here is another example of ambiguity. Both charts are of Nasdaq, just different time frames. Again there is the question which top is the top, in this case THE top seems to be the one in red as it is the highest one. But there is no 5-wave move leading into it and also wave 1 down (in red) is definitely not a textbook 5 wave movement. There is some overlap and wave 3 might even be the shortest, a definite no-no. But if we push on, the count in red suggests that we need one more drop (in a wedge as there again there is overlap) to complete 5 and with it the total of Wave 1. By the way, waves 2 and 4 also overlap by a rather large margin, also a no-no. Suppose one sticks to this interpretation than the next big move – once wave 5 is complete, would be Wave 2 up by about 50/60%.

A better , and perhaps more correct – way of counting this would be to place a large, irregular  a-b-c flat in front of the top. The red top would actually be the top of wave b (always a 3-wave move!) and c would be the red wave 1. The top then becomes the blue top which actually fails to make a higher top than the red one but is at least at a higher point than the start of the irregular flat. Wave 1 down now becomes the blue count and even the mess in early August starts to make sense. The low point of wave one itself might be a miniscule failure, not surprising given the idiotic moves up and down at that time. From that low a very clear a-b-c correction occurs with every detail in accordance with the pragmatic rules. The c of the correction is a nice wedge as is normal and the whole thing retraces a very nice 62%. That is wave 2, ergo we are now in wave 3 and just the start of it and rather than go up we should drop sharply ! A completely opposite conclusion.

To add a little confidence to any count it is good to look at the bigger picture, on the right. The big B-wave, stylized is clear enough. The next serious target normally is at the B level of the larger B-wave. So far we are not even close. This does not unequivocally favour one count over the other (neither fits particularly well) but ultimately the Nasdaq should make new lows and that fits best with the blue count. Because most readers do not care that much, if at all about EW niceties, the end result in English is that nothing is certain but we could have a precipitous drop any moment now as wave 3 fully develops.