EW has some aspects that make people wonder in bewilderment how anybody could possible attach any predictive value to it at all. There are tops and “orthodox” tops and failed tops. There are extensions that out of seemingly nowhere add 4 waves to a sequence. There are “irregular” patterns where lower lows or higher highs do not count and the list goes on. For those interested here is an example; 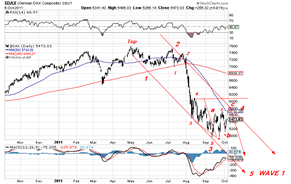 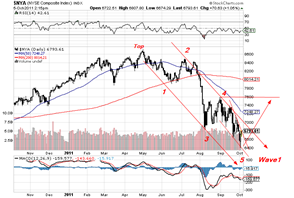 On the left the DAX and on the right the NYSE index. Both have 3 tops at slightly different levels and the middle one is the highest but not necessarily THE top. Getting there certainly does not look like 5 waves and the first wave down on both is anything but a clear 5 waves. The Aug 9 action of 4 days of 400 points up and down obscures the picture, There is no clear wave 4 on DAX whereas there is a pretty clear one on the NYA. Wave 5 on both charts has the clear earmarks of a contracting diagonal, or in English, a wedge. However the position is different. On the DAX the wedge hugs the lower trend line, whereas on the NYA the wedge is further to the right so one could be wave 5 of 3 and the other wave 5 of the entire wave one, different degrees! The DAX made its low almost a month ago and the NYA just a few days ago, yet we are supposed to believe that the world problems are now coming from Europe.

Looking superficially at both charts one might be inclined to say that they are essentially the same, and they are but the implications are quite different for the next move!