On the 26 of August, about 2 months ago this was my expectation with regard to the TSX; 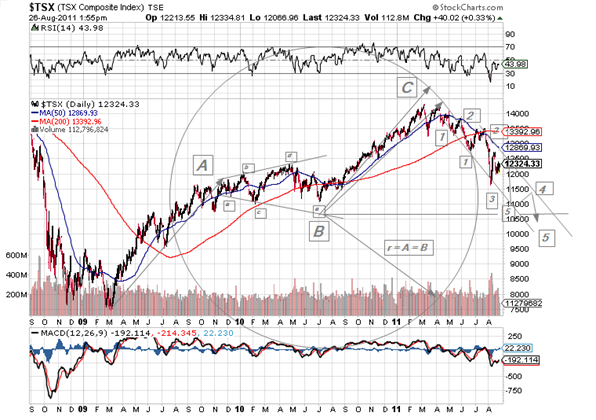 One of my better charts, I think, with the A-B-C B-wave loud and clear in this stylized format. That, as it happens also puts an initial low very near the 10700 level where 62% of the entire correction will itself be corrected. Notice that we did and are doing pretty well exactly as expected, except that wave 4 is sharper to the upside having already regained about 800 points in just a few days. It could have another two days of 300 points to get to 12200 or so for wave 4.Time will tell. In the meantime here are some updated charts of the TSX and the XIU (the same thing in a slightly different format); 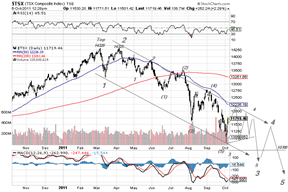 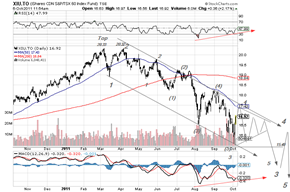 Rather than two 1-2 to start , as in the top chart, I have used three, so the pattern becomes 1-2,1-2,1-2,3-4-5,4-5,4-5. using the first top which is actually higher by 4 and 1 point respectively. It is actually possible to add even a fourth 1-2. What speaks for the first top is that the entire drop so far is perfectly contained within a channel. It is possible that there is one too many 1-2 as well, but even then we need a fifth down to complete the entire thing. If we get to 12200 or a little under that it would be a fairly fast move of more than 1000 points. In all probability this would be wave A of a triangle (all waves 2 are zig-zags) so I would look for alternation. We will see.