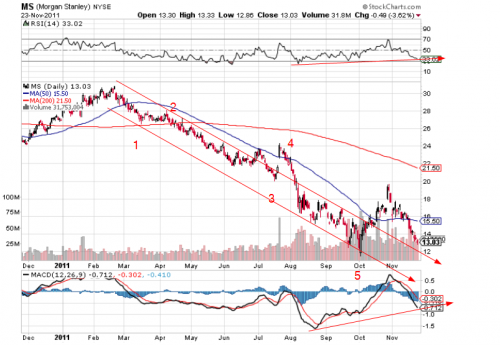 Both MS and GS have recently gone through a rather wild roundtrip. In the vase of Goldman it was up some $30/35 and then back down again. Morgan Stanley did a little less but on a proportionate basis , quite a bit more. Up $8/9 and back down again, almost. Those are like 80% moves, at least on the upside and we almost caught it but unfortunately did not jump on the situation wholeheartedly. MS is now again approaching that $10 level, after moving down in a relatively clean 5-waves. The initial move up looks to be an a-b-c so it is probably counter-trend which does not bode well for the long term. But it is worth remembering that the price paid for Bear Sterns was upped from an original $4 to $10. For a classier outfit like MS that may well be a bottom of sorts. Perhaps we are in a large flat of sorts and we could again double in value in a very short period of time if things go right.

GS is in a similar position but at $87 it is not that obviously at “rock-bottom”.