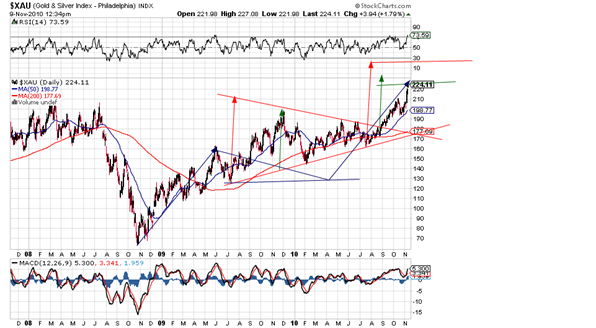 This chart is precisely a year old. It shows the A-triangle B – C pattern indicating that this index was coming to the end of its ride. The high point was around 224 at the time. The index, of course, contains 13 or 16 of the major gold producers, ABX, G, K, NEM Agnico etc.etc. and represents the body of senior gold miners well. Here is where we are today; 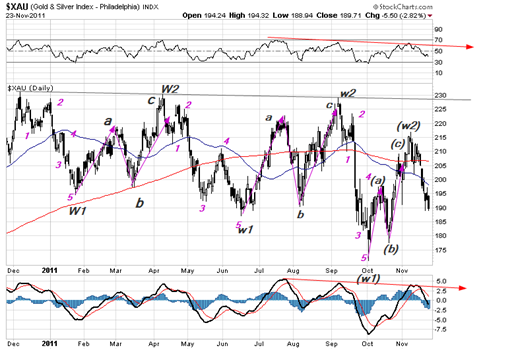 The start of this chart corresponds with the end of the one above. It covers an entire year and has three tops, the first approximately at the level where THE top was expected a year ago. The next two tops are lower!, so we end up with lower highs and lower lows which excludes the possibility of an expanding triangle (megaphone) or any other known pattern. The first down leg leaves something to be desired but nevertheless is most likely a 5-wave affaire. The next two down legs are both definitely 5 waves. The counter legs are all 3-waves and most clearly so. Ergo this is most likely a series of three1-2 that are invariable followed by a virtual collapse,which might look as follows; 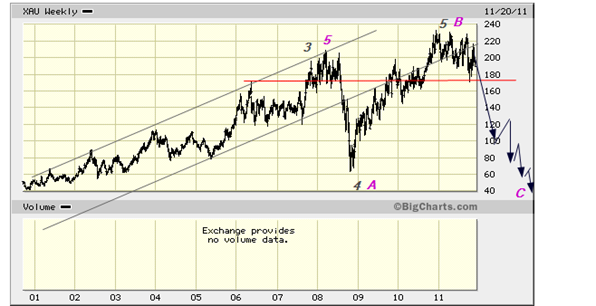 In the big picture it is not clear if we are looking at a 5th wave or a B-wave into the latest top. Fortunately as far as the immediate outcome is concerned it does not matter. A realistic target is in the order of about 60 or lower. Note that if you look at the thin red line in this chart, that the XAU just two or three weeks ago was trading at levels where it had first been 6 years ago! The spread between the stuff and the miners has widened with each passing year. 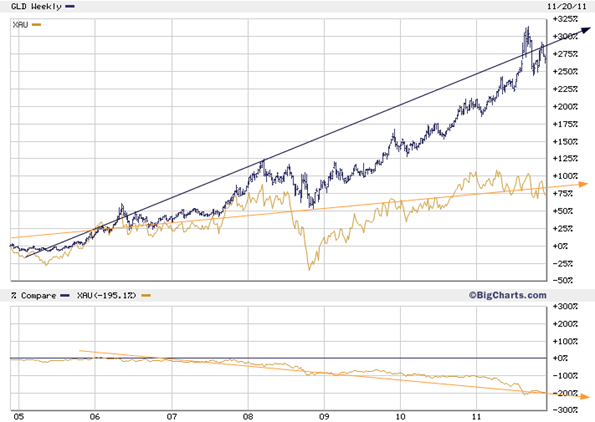 The blue is the stuff and the yellow is the XAU. You missed out on a 200% relative gain by owning the miners. If the stuff comes down as it must as there is not a single investor left that is not long, one can only wonder at what might happen to the miners.