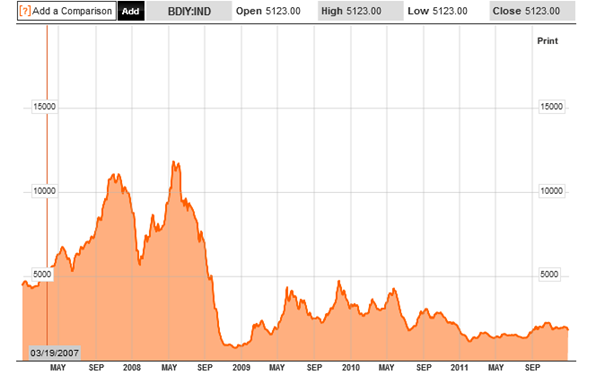 The Baltic Dry Index is constructed in such a way that it gives one an immediate idea of what it costs to move (dry) goods by sea. It is compiled in London and apart from historical connections with the Baltic, has nothing to do with that specific area  as it is a world wide barometer. Charts are hard to get and it does not express the value of certain stocks like the Dow Jones Transport index, which recently made an all time high. This index provides a measure of the costs to move freight, or, from the other perspective, what shippers can charge.The Philadelphia Exchange has a similar index SHX, shown below. 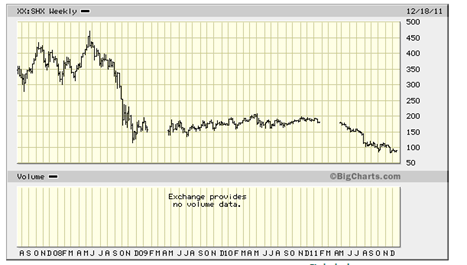 The charts are very similar and they both indicate that charter rates have dropped by almost 4/5 over the past three years. The rates for VLCC’s, Very Large Crude Carriers, have reportedly dropped even more dramatically to under the cost of operating the vessels. This essentially explains the situation below; 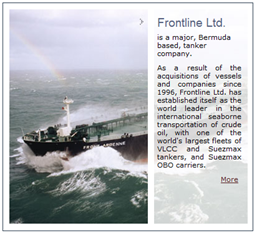 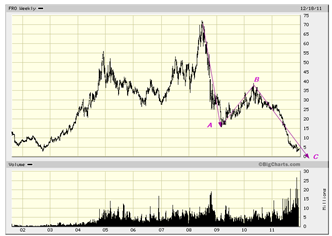 The fleet has grown much larger and the amount of oil gas stayed about the same. Worse yet there are a good number of these VLCC under construction so capacity will grow even further by about 14%;

But it is not just oil transportation that is suffering as a quick look at EXM (Excel Maritime Carriers) makes abundantly clear. This company’s motto is, like Atlas, “We carry the World” and it certainly looks very painful. 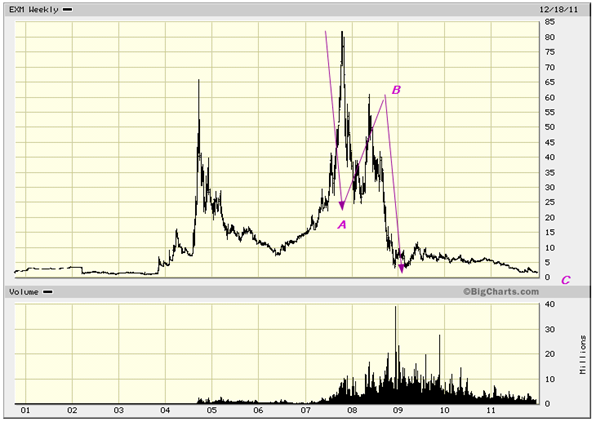 Bank of America almost went under in the late sixties early seventies as a result of bad loans to the shipping industry. Not only does the income dry up fast but the value of the ships themselves can drop even faster. The moral of the story is that one has to be very careful when investing in capital intensive industries that have questionable growth prospects. Things can and do change fast not only as a result of Schumpeter’s creative destruction but also simple as the result of cyclical over capacity. Think airlines, pipelines, perhaps infrastructure in the wrong place (China) etc. etc.