A small oil and gas company operating in places like Columbia and Peru. Used to be part of Paramount Energy , I believe, but was spun out as a separate entity. It trades on Toronto and on the Columbian exchange a.k.a the Bolsa de Valores de Columbia, which may, one day, be an advantage given how well we here in Canada are able to integrate our 13 regulatory bodies and two languages. Here are the charts; 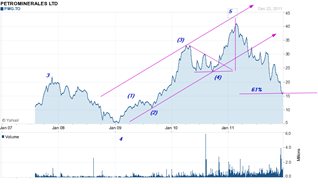 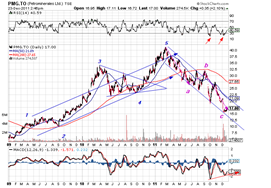 Needless to say I have never looked at this stock before, but then using EW you really do not need to have. Only the waves count!

Clearly there could be a 5-wave structure up from the lows in early 2009. That would coincide with most of the rest of the world so that is not to big of a stretch. Furthermore, as we are now overlapping the preceding bump, that must have been wave 3 and, all though there is no history prior to mid 2007 one must assume that a complete 5-wave sequence ended at the $41 high. If that is the case that would be wave 1 up and this drop should be wave 2. Standard first target, all other things being equal, is the 62% retracement level at $16 where we were a few days ago. In detail: 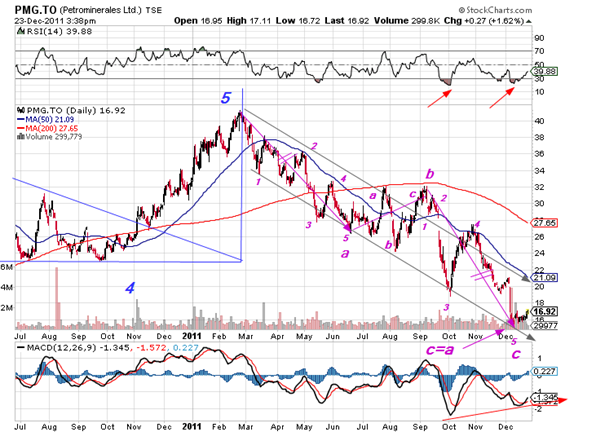 Typically a correction is an a-b-c, three wave affair. Often the waves c and a are vector equal due to some mysterious law of nature that just loves symmetry. With a little imagination that is exactly what we have here. Last , but certainly not least, the RSI with not one but two drops below the 30% line is clearly announcing a change in mood. The MACD is not far behind. An initial target, by the way would be at $32, but even $21 for starters  would be nice.