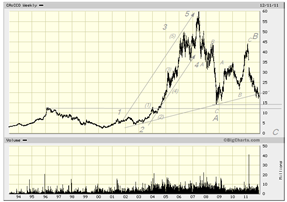 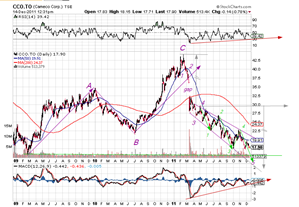 Continuing on the previous theme , that is that electricity is the basis of civilization and that we are running out of fossil fuels, one would think that nuclear power would get rather popular rather quickly. Markets are notorious in their ability to ignore reality for the longest time and then, all of a sudden, acknowledge the inescapable and catch up real fast. Having been too early in liking this stock once before I hesitate to recommend it now. But should it drop further and make a slight new low below the March 2009 one (roughly below $15), then it would seem to me to be a compelling buy.

In EW terms the stock should trade at a new low under $15 to fulfill the pattern shown in the Bigchart. Then, depending on the degree of wave 5 into the top, it should not trade below $10as this would cause overlap (the top is actually wave 3 and for the past 5 years we have been doing wave 4).  Looking at the shorter term chart, there is no question that it was an A-B-C corrective rally, which should be completely retraced. The structure itself is a 5 wave move with a 5th wave diagonal expanding triangle (that is a wedge). It appears to need one more push down to complete. It should then trade back to the origin of that wedge ($27.50). An ideal point would be where the wedge is equal to wave 1, 2 and 3 combined, see black arrow.