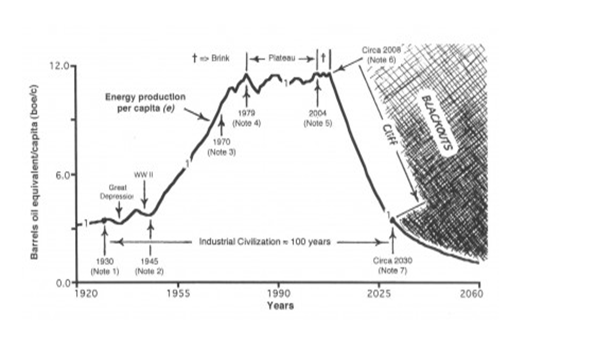 The internet has a lot of fascinating stuff in it. Here is one that I found to be of particular interest. I believe this “theory” a.k.a. the pulse theory of civilization , by a chap by the name of R.Duncan has some good points even if they are hard to accept. Civilization is not defined as reading Gibbon’s Decline and Fall of the Roman Empire in your spare time. A more pragmatic definition is used, namely that we are civilized when energy consumption per person on earth exceeds 30+% of the maximum possible. Consumption in terms of electricity plays a major role. The name is derived from the Olduvai Gorge in the Serengeti in Tanzania (near Mount Kilimanjaro, partly because this supposedly is a site of the start of mankind, i.e. the stone age, to which , by the way we may return, and partly because the slopes of this gorge start at a slight angle and then become steep cliffs. I suggest you Google this stuff as I cannot do it justice.

What is interesting is that the 100 years of industrial civilization that we will enjoy, is expected to be only 100 years from 1930 to 2030. Similar “theories” have been postulated, think of “peak-oil”, Jeff Rubin’s the world is getting a lot smaller and dozens of others. Most are geared to energy availability which is also a cornerstone of this theory but it is more refined in that it homes in not only on energy, but also our ability to generate electricity which, by far, is the main end use of energy. Read this and you may want to consider buying more CCO or other uranium miners.