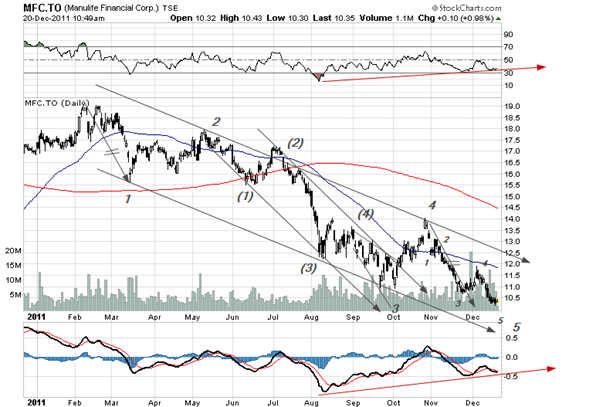 In the Canadian Financial Planner the following comment was made with regard to Manulife,s “Income Plus” product that came to market in 2006;

In real life the supposed waste of time became a huge headache for Manulife that believed in this concept. A little chart of the TSE makes this abundantly clear.

Clearly in 2009 we spent sometime during which this 10-year time horizon assumption did not work out, and now again we are close. Even though the 10-year period has not yet passed for any of this Income Plus product as it was only launched in 2006, it is not looking too good. We are now going into the 6th year and virtually all that was underwritten for this product is at break even at best, so most is underwater. Last year Manulife “hedged” part (1/3?) of this exposure while it was underwater. The problem with hedging at that point in time is that it is almost the equivalent of taking the loss.

In any case this hedging got the analysts all excited, one in particular I understand at RBC, that led him to get bullish and rate the stock an outperform in the spring of this year when  MFC was trading at about $19. Today, miraculously, with the stock at a little over $10, the analyst has this eureka moment and changes his mind right out of the blue and now has an underperform rating on the stock (and all other lifeco’s). Did your broker call?

We have referred to this stock as the canary in the coalmine and recommended selling it early this year. Today it looks like a buy for a trade. After that this stock is toast if the market goes down further.