These people print cheques. Cheques might be going out of style but not just yet. In the meantime they make them more and more stylish, small works of art, so they can charge a lot more. They have a captive audience as this company has arrangements with virtually all the banks and are paid a commission on each order.

Here are the charts; 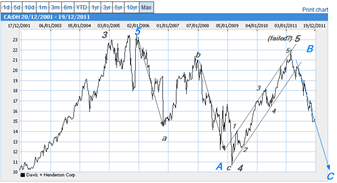 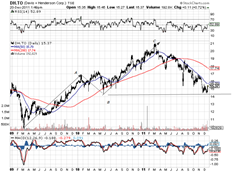 There are 3 possibilities. We have a big flat starting in 2006 with A down into the lows of 2009 followed by a B-wave up. We are in C that should ultimately lead to a new low. Next the whole thing from 2006 to 2009 is one big wave 4 correction followed by a 5-wave 5th wave that fails to make a new high. We should fall back to the 4th of previous degree which is the 2009 low. And then there is a third possibility, which is that from the lows of 2009 the stock started a brand new bull market and is now in a wave 2 correction. This is extremely unlikely as it goes against the grain of most other stocks.

As we have no idea what the proper count is for the drop this year, other than that the stock is doing pretty well what dozens of other stocks are doing, we expect a rebound to perhaps $17 and then back down. Use a stop at $14 now.