MS according to the charts could be forming a triangle. Here is an update; 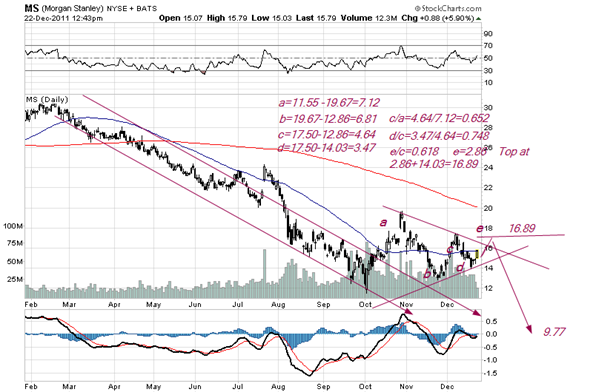 We are following this with a little more interest than usual, having missed the opportunity to buy at $12. At the risk of boring the reader, I have done a little math just to test the validity of this being a triangle. Wave c relates to a by a factor of 0.652 and d to b by a factor of 0.748. Not ideal but close enough not to reject the notion of a triangle. Wave e now may not exceed c at $17.50, but also does not have to be contained by the triangle’s boundaries. The ideal level for e would be at $16.89. All this is mostly academic as you should not trade on it. But if it does all this, and it is a big if, then it will be a screaming buy at just under $10 where it would hit the upper channel line as support. $10 is also what was paid for Bear Sterns by JP Morgan. It is unthinkable that it would not pay that sum again for it’s own, far more distinguished, offspring now that it has been orphaned by it’s other parent, Glass-Steagall.

There are many other stocks that have a triangle forming, at least the possibility for one, Siemens (SI) and the TSX are possible examples; 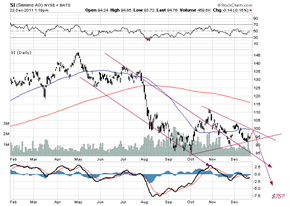 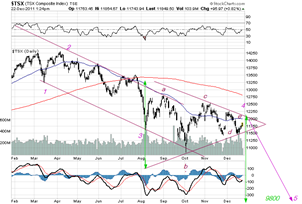 Both are presently in their respective e-waves, and whether or not they are actually forming triangles is perhaps less important than the fact that they have been going sideways for 5 months. Consolidation patterns are invariable resolved in the same direction in which you entered them, in this case down.