We thought it was a sell at about $94. Not so. Again it looks like a sell, even more so now; 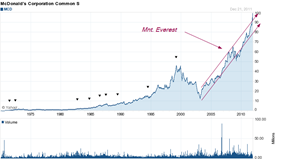 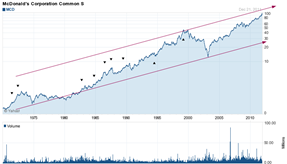 Here is MCD in both a arithmetic and a semi-log scale. If you concentrate on the arithmetic one you get the feeling that you are at nose-bleed heights and want to get off as soon as possible. The take from the semi-log chart is that you might just want to stick around un till you hit the upper trend-line. In both cases, superficially at least, clearly discernable 5-wave sequences are visible, either for the 5th wave or for the entire structure. In more detail we get: 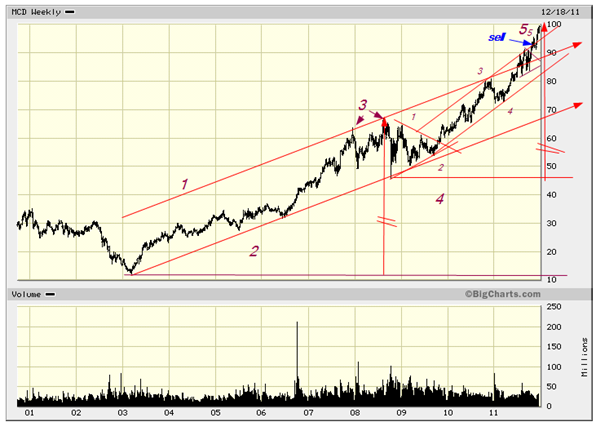 a. The Mnt. Everest phenomenon appears to be at work here. The stock is pulled up to reach that $100 magic target. In the process it is creating a considerable “throw-over” at two different degrees!

b. Even if it is not patently clear where it begins (and ends) there is nevertheless a triangle wave 4 for wave 5 and perhaps another one for wave 5 of 5, which is itself sub-dividable in 5 waves.

Just an example. You can buy a put option valid for more than a full year at a strike of $87.50 for a premium of $5. If the stock were to drop at the same rate that it went up (over the year) it would be somewhere in the order of $72, consequently you would be “in-the-money” by about $15 and assume a time value of zero you would have a gain of 300%. Socks always drop faster than they rise so this could happen a lot earlier and there would still be time value. This is just an example as theoretically all options are priced according to the risk and one should be indifferent to which one to chose.

By the way the p/e is close to 20, fairly rich compared to a market average of 12 or so. This is , of course, a growth stock?