For more than a month now, MS has followed our script quite nicely so here is another update most of which can be found in the previous eight blogs. First the “big” picture. The charts that are available to me are flawed in that when you look at things over a longer period of time the charts are based on daily or weekly values that often deviate substantially from reality. I will use MSN and Yahoo charts as follows; 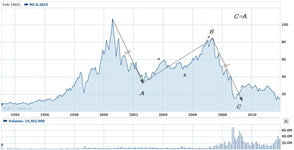 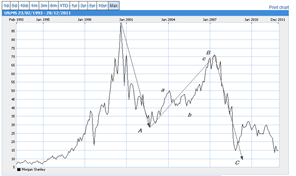 Notice that in the MSN chart the high in 2001 is well in excess of $100, whereas in the Yahoo chart it is $90 at best. Similarly the lows shown in in the latter part of 2008 are about $15 on both charts. In reality the lows occurred at around $9.68 if I am not mistaken ( Mitsubishi bailed them out with $9 bln. at the time.) , so we have not broken that level since as the most recent low was $11,58. In any event it is rather obvious that we are dealing with a nine year time frame during which the stock dropped more than 90%. (Prior to 1986 the company was a partnership and consequently did not have stock.) We dropped below the fourth wave of previous degree (at about $20) and the whole structure appears to be rather symmetric. Therefore it is possible that the entire correction for this stock is over in which case the situation looks like this; 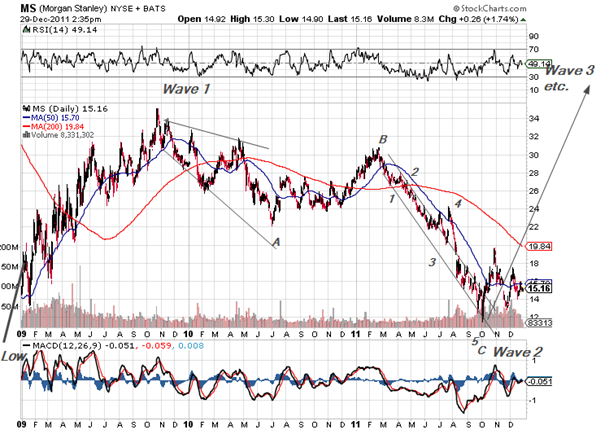 It is normal for first waves in new bull markets to retrace almost the entire first leg so this count is totally credible particularly since it is a standard 3-wave a-b-c, the hallmark of a correction. The only problem is that there seems to be a triangle forming over the past three months!!! Here it is once again; 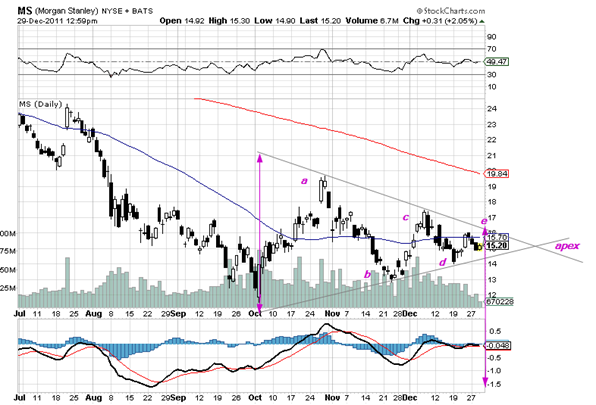 So far at least it is clearly a triangle. These structures can only occur in waves 4 or B positions, both of which are bearish. The former immediately and the latter after a corrective c-leg up. For our big picture scenario to hold the stock may not drop below the old low (of 8?) So if it gets there, buy it around $10. Alternatively there is no triangle and it would probable be a buy already.