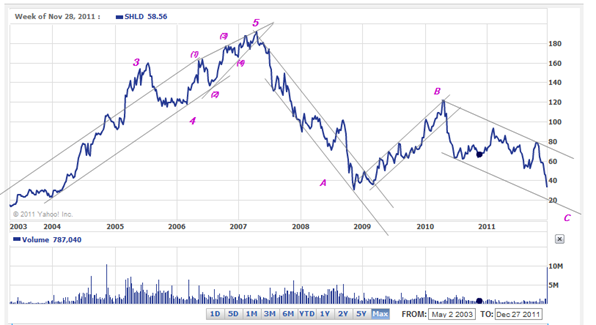 Sears, originally Sears Roebuck, has been around for more than 130 years. Once upon a time it was the largest retailer in the US. It’s catalogue once upon a time was almost 600 pages long. It has such in house brands as Kenmore, Craftsman and a dozen more. I used to own Allstate insurance , Discovery credit cards , Dean Witter and so on and so forth. When it merged with Kmart in 2005 the name changed. As is so often the case they build the largest office tower in the world in 1974,( it still is the largest in the US but is now renamed the Willis Tower) just before the gradual decline started to set in. The Eaton center has the largest store.

The chart is not entirely clear but we do need to make a new low, say at $20 to hit the trend-line. Then the C wave should become a 5-wave sequence which is virtually impossible without this stock going a lot lower from here. Sad when you think about it.