Late October we called for a further rise in the stock to complete a B-wave into the heavens. It is doing exactly that and is now close to it’s destination: 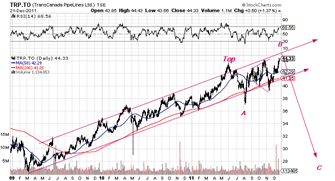 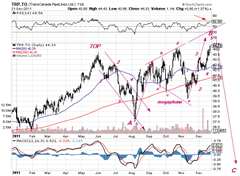 We are approaching the upper trend line and should hit it in a matter of days. My best guess is around $45 or just a little higher. We are now in the 5th wave of the thrust out of the “megaphone” and it is already almost equal to the 3d wave in that leg.

This is of course a blue chip stock and it’s earnings are regulated by government edict so one might wonder what could possible go wrong. Fundamentally earnings per share have been dropping and the tolls levied on users have been rising at an alarming rate whereas put through volumes have been declining.  There are major cost increases and  the delays in the new pipe through the US are not helping at all. Furthermore one might well wonder why a utility that is regulated (NEB Nat. Energy Board + provinces) should be allowed a return of 9% in an environment where 10-year Gov. bonds earn 2%. It recently moved into the solar business where it has little experience.