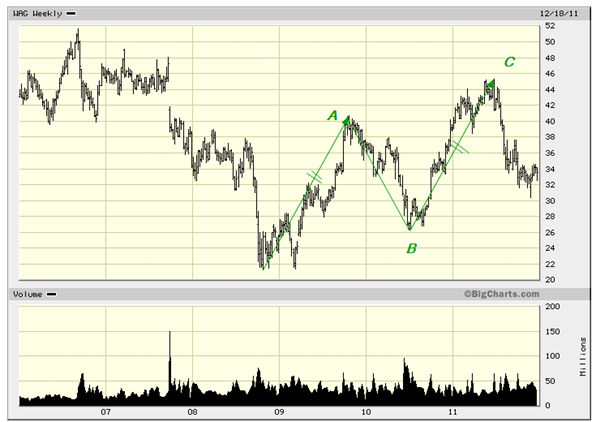 Walgreen the US medicine cabinet reported earnings and supposedly the results were a little disappointing but that is not the issue here. What is, is that the stock made a classic B-wave of the kind that I have shown at least two dozen times or more. This one is particularly interesting because the two legs in the B-wave, A and C, are absolutely, precisely to the tick, perfectly equal both with respect to the distance travelled and with respect to the direction, a.k.a vector equal.  I have never stopped being amazed how often this perfect symmetry occurs.

We have another one that has done the same, albeit in a bear market as apposed to Wag’s  correction. Guess what, it is none other than RIM! 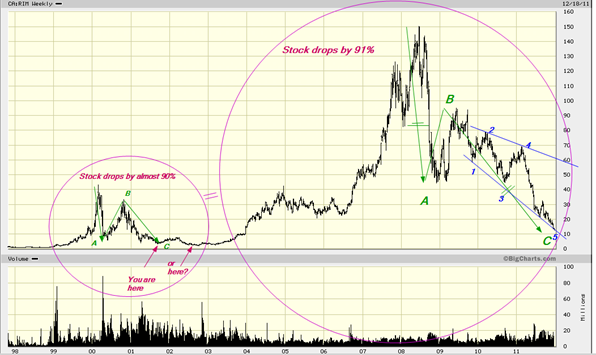 First of all, if you look at the green arrows, deliberately put a little to the left, you will see that the arrows are absolutely perfectly vector equal! This probable occurred yesterday when the stock hit a low of C $ 12,80. The chances of a turnaround happening, seemingly by accident, at exactly such a moment are pretty high as markets for some inexplicable reason love symmetry.

The other , in my opinion , fascinating aspect is that history does repeat itself or, at the very least , it rhymes.  The drop in the small circle back in 2000 and 2001, is about 90%, just eyeballing it as I do not have precise charts. The drop this time around, from $150 to $12,80, is just a little over 91%. Furthermore, the patterns are both A-B-C’s where the A and C legs are vector equal (the small one is a flat and the big one a zig-zag).

It is not an accident that only yesterday every Tom, Dick and Harry fell over themselves to downgrade the stock and find reasons to stay away from it. Today there are rumours of at least three major suitors thinking about becoming a white knight, Nokia, Amazon and Microsoft among them. Now the word is that RIM is worth more dead than alive.

Time will tell. History may not repeat itself again but there may well be a few bucks to the upside. This is certainly the case if the C wave from $95 to $13 is indeed a diagonal!

Walgreen, by the way, probable completed a first 5-wave sequence down and could rebound back to about $38. Then it is a sell.