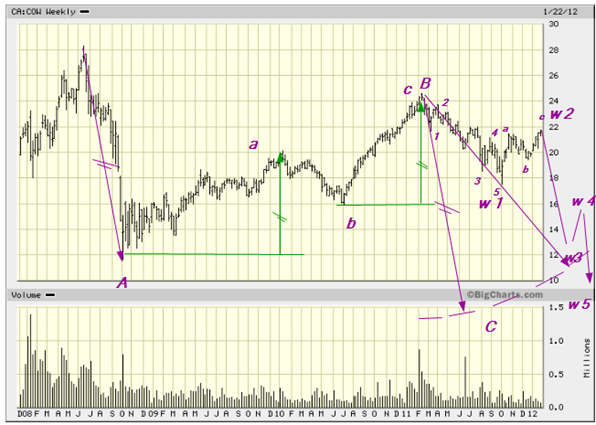 Mid last year we had a look at COW and the US MOO (not shown) Etf’’s. Both have performed roughly as expected except, perhaps, that they did not go down as far as they could have in the first wave of C. In this case the “logical” level would have been about $16, the level of the b wave in the larger B rebound. Wave 2 may still go a little higher, but not much so if, for some reason, you still own this ETF, it is now a very good time to get out.

Speaking of cows, Canada still believes in a “supply management” system for dairy cows, eggs, chickens etc. These systems, despite a lot of hype to justify them, are all essentially kartels where production levels are controlled by a central (government) agency and competition is kept out by very high tariffs.  Central Banks operate along precisely the same lines. The authorities invariable believed in the ability of markets to self-police and find their equilibrium on their own when it came to dismantling  Glass-Steagall, the 5 pillars and just about every other regulation. Not so when it comes to setting interest rates or milking cows! The distortions this creates are immense. In Ontario the consumer pays about twice as much for milk or cheese as in the US or Europe. Consumption has consequently gone down steadily. What is even more interesting is what it does to asset prices.  A typical farm in Ontario is about 100 acres (25 hectares) in size, but usually additional land is rented to get to some sustainable level of efficiency. The price about $750,000 to 1 mln. if growing crops is the farm’s business. But if it is an operational dairy farm with 100 head of milk cows, the price goes up to nearly $4 mln, or $30,000 a head on top of that! Bernanke &Co. seem to be oblivious to the unintended consequences and continue to justify their actions by the preposterous notion that interest exist only for the purpose of providing central bankers with a toy.