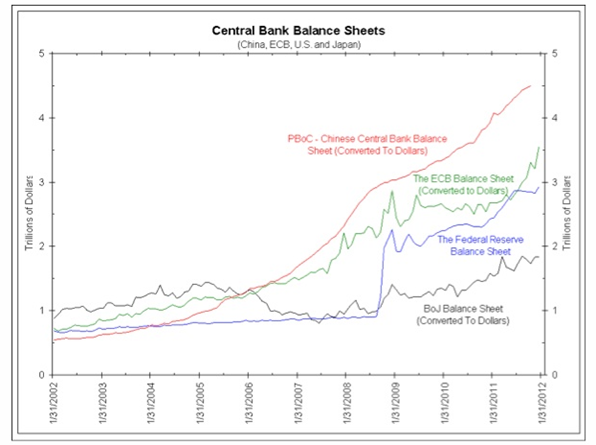 This is a pretty neat chart from J. Mauldin’s weekly e-letter taken from http://www.ritholtz.com/blog/2012/01/living-in-a-qe-world/

These are the BS’s (Balance Sheets) of the 4 main central banks in the world, the Fed, the ECB, the BoJ and the PBoC. Notice that up and un till the beginning of 2007 the total for all four was about 4 trillion. Today the total is about 13 trillion. Roughly the same size as US GDP, and close to 1/3 the value of all equities in the world. This is how you get cows to $30,000 (see previous blog). The numbers for the US and the Euro zone are, not surprisingly, pretty close as their economies and populations are roughly equal. The outlier here is clearly China. With an economy less than 1/2 the size of the US and/or the Euro-zone and more or less equal to Japan, it’s 4.5 trillion  central bank’s balance sheet is proportionately 3x the size of the next two and more than 2x Japan’s. All of this is essentially created out of thin air. For the moment this was done with impunity as the velocity of money, however measured , dropped as fast as the balance sheets expanded. But some day this will have to stop and be reversed. Going by the ECB and the Fed, we suspect that it will be soon. 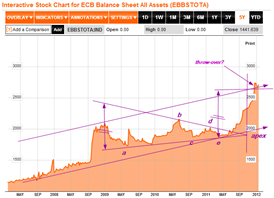 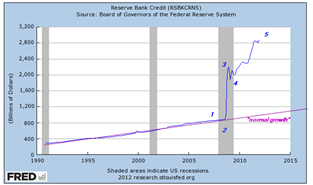 You can click on either chart to enlarge. For the ECB I could only get a Bloomberg chart for the last 5 years but it will do. There is a very clear two year period of consolidation that requires very little imagination to see a triangle. These , of course as we know, occur at the end of the ride which should then reverse itself. The chart from the St. Louis Fed. is much longer and allows for a 5 wave count. What this means and if it is appropriate to apply EW to these charts is an open question, but something is about to happen.