This mine is the largest gold mine and third largest copper mine. It is situated in Papua province of Indonesia, almost on a par with the Congo as a vacation destination except that there are still real head hunters. This thing is pretty big; 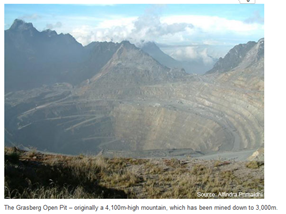 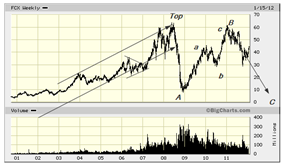 The mine, situated on the Grasberg, or better yet , in it, is huge and the grass long gone. There have been disputes with the locals which in Indonesia is pretty well chronic. Due partly to strikes etc. the latest quarter’s earnings were down by 59%. The stock this year is down 50% at the lows. Looking at the chart more of that should be anticipated. Here are the details; 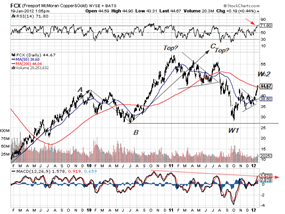 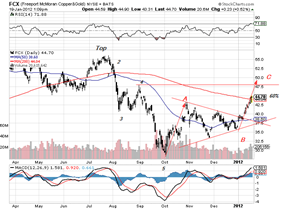 A argument could be made that the second top is the real one, if so it would be a “failed” top. It is not a great concern either way except if the stock rises any higher than today as that would make the initial drop an a-b-c instead of a first wave. The stock has regained about 60% by way of an a, triangle b and c. If we use the second, failed top the stock could still go a little higher but it certainly does not have to, seeing that it is at the 200 day moving average. If long we would sell here.