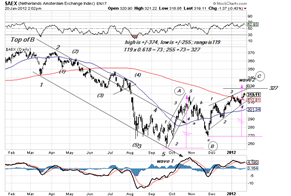 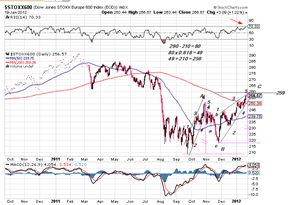 On the left the AEX, the Amsterdam index, the world’s oldest, and on the right the STOXX600 which is essentially a basket of the largest 600 stocks in Europe. For the first time in a period slightly shorter than two years the RSI (Relative Strength Index) is registering a value above 70, normally assumed to be a sign that the market is somewhat overbought. The Dutch hit that level about three months ago and have fallen off.

In all other respects the charts are virtually identical. On the AEX 5 waves down are readily counted, which is not the case with the Stoxx600. But from that point on things are identical. First of all the retracement levels of 327 and 259 respectively, representing roughly the 61.8% level, which levels are never meant to be precise targets, just rough estimate where things might go, have been reached or will be soon. The structure of both corrections are identical, that is they are A-B-C’s, 5-3-5’s with the C wave as a wedge. C and A are roughly equal, either absolutely as in the STOX or as vectors as in the AEX. The MACD is warning that things might turn soon.

Pretty well identical patterns exist in the DAX (see latest blog) , the FTSE, and others. The exceptions are in the “basket” cases, Italy (see previous blog) , Spain’s IBEX and , of course, Athens. The conclusion is that all markets, more or less, are now ready to go down again. Also, all this intervention and “kicking the can down the road” and so on does little for the markets. After three months of noise , the ECB lending through the exchange mechanism of nearly 3 trillion, the IMF going to 1 trillion, Greek bonds going to 70% haircuts but miraculously  no default, the FED helping out (illegally) through central bank to central bank swap arrangements and the list is endless, the AEX is less than 1% higher than back in late October. The STOX did a little better, a bit more than 2%. This is true also for the S&P whose chart is similar as well, except that it is much closer to the spring highs.