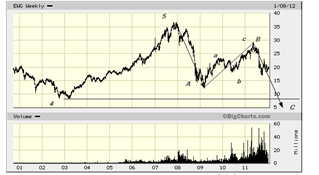 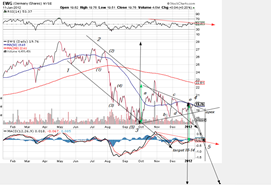 Germany keeps confusing, one day it has the lowest unemployment in 20 years and confidence is at its highest since whatever and the next day GDP goes from a healthy 3+ % to actually shrinking, albeit at a very small rate. There are also at least two dimensions, one political and the other economic and the undercurrents are very difficult to recognise. The charts should tell the story.

The DAX , as with the DJI, is not always the best index to make a point. Both contain the top 30 companies and their performance is far from average. Furthermore these indexes obviously attract those that may wish to influence the outcome. This is less so with the somewhat more obscure EWG IShare MSCI. You can click on the chart to enlarge them. At the risk of repeating myself ad nauseam , the B wave in the large chart is perfectly clear. This alone suggest a new low should be forthcoming. In the small chart, as in so many others, a triangle is clearly visible and complies with all the rules. The fact that it trades sideways out of the channel is perfectly normal. In this case the triangle must be a 4th wave as it is occurring in the C leg. The ideal target would be wave 4 of previous degree, about 8. The `normal` thrust from a triangle would get it to about 16-14, BUT it is not unusual for a 5th wave to cover the same distance as waves 1 through 3 combined, roughly 10 which would do the trick.

In terms of how far-fetched this prediction is, or how radical perhaps, note that if this does happen we will be back exactly where we were 10 years ago!