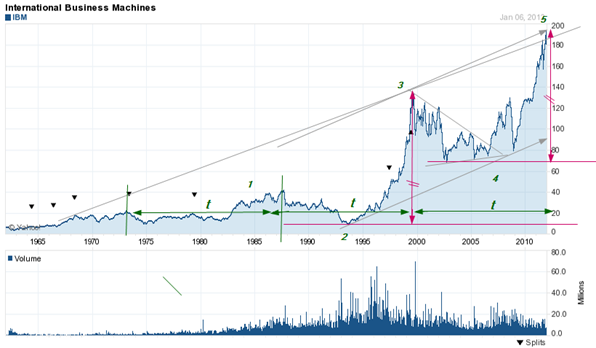 Back on July 19th 2011 the chart on IBM suggested that the stock would not trade much above $193 ????.  Now , 1/2 year later this prediction can be refined. The stock will not trade above $194,90, a recent intraday high. Then and now the reasons are mostly the same. First of all we have reached the parallel trend-line that connects the lows of 2 and 4 and is drawn through the high of 3 (standard channelling). Secondly the stock exceeded the line drawn through the highs. And thirdly wave 5 is now equal to wave 3 and as 3 is usually the longest 5 can not go higher without violating that guideline. To that can be added the Mnt. Everest X2 effect and the interesting fact that , despite Warren Buffett’s professed agnostic view on all that is technical, he bought a nice chunk of this stuff and the stock immediately cratered about $10 but came back to a new high after that. Today the stock sits at $182

Curiously, if one cares for cyclical things, the stock has displayed a relatively stable cycle of about 12 or so years. Each time it peaks it suffers a loss of at least 50% or more. Assuming history repeats itself you are about to lose half your money; one needs a lot of faith in the oracle to put up with that. Also be careful not to infer that since this company is known as Big Blue, it is a blue chip stock, they simple do not exist anymore.