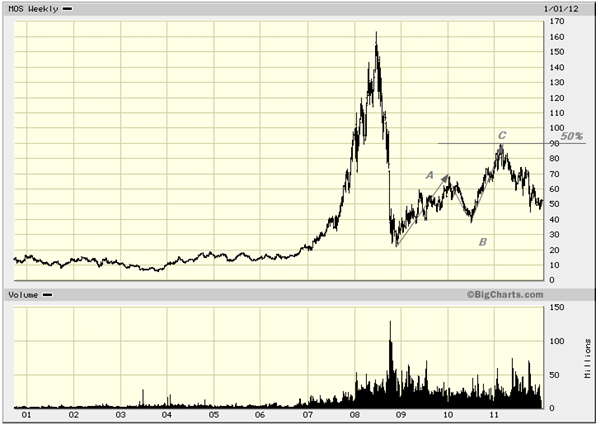 We commented on this stock only once before, in early 2010 when the stock was around $70. At that time it had done two almost equal legs up from the lows which could have been the end of the correction. In hindsight the stock did go higher but not after first losing $30 or about 40% of its value.

Early this year the same thing occurred at around $90. As the retracement was now about 50% the chance of the correction coming to an end was far greater. Since then it has lost 1/2 of its value. The p/e is around 8, so very modest. Today they report a drop in income of 39% which would put the p/e around 13 or so, above the market average. Expect the stock to go down at least to the $39 level (B level in B-wave) and after that to new lows.

This company is in phosphates more than other fertilizers  but the message is clear also for Agrium and Potash.