See previous blog.  We expected the stock to drop to roughly $20. It did but stopped dead in it’s tracks. Reason to perhaps change the count as follows; 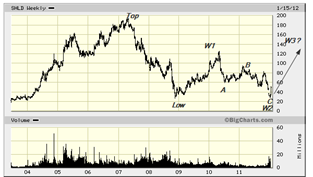 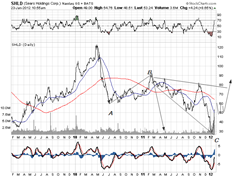 In the big picture the stock drops from $200 to just over $20, that, by any measure is a bear market and it could possible be all of it! If that were the case we would now be in a new bull having completed an initial first wave up followed by a deep correction, so deep that it almost retraces the whole first wave up. This is not at all unusual. The retracement would have to be an A-B-C which we have. Better yet C=A in terms of vertical distance travelled. The interesting part is the C wave, shown below in detail; 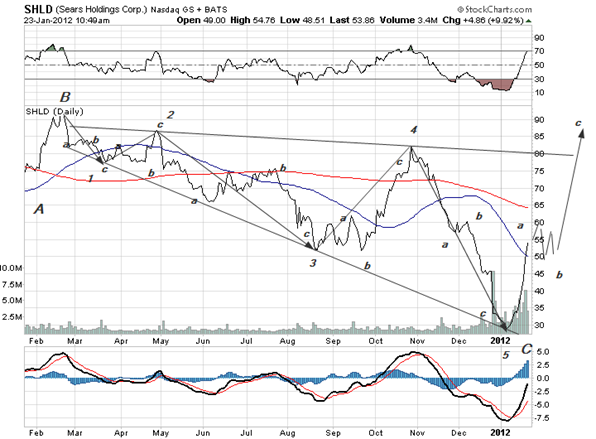 This is an almost picture perfect expanding diagonal triangle (3-3-3-3-3). Each leg, both up and down consists of 3 separate legs. There is always a lot of overlap and alternation between 2 and 4 occurs often. Once complete the rebound tends to be violent and  takes the form of either a new bull market or, at the very least an A-B-C up that should retrace the entire diagonal. Soon, perhaps at around $60 the A should stop and a pause should happen, often as a triangle. Should this in fact occur, the stock should be a screaming buy. Always use a stop just in case something else is going on. F, Ford is a good example of this particular pattern.