This is Canada’s largest public construction and infrastructure development company, builders of the CN tower. They do all kinds of wonderful things, just one out of many being in the field of “steam assisted gravity drainage” for bitumen in the tar sands. Think pipes, a lot of pipes! They did this on a project for Suncor and lost their shirts. More recently, together with SNC they won a contract from the government, Ontario Power Gen., to refurbish the Darlington nuclear power station for $600 mln. This is known as the Definition Phase of the Darlington Retube and Feeder Replacement (RFR) Project; think pipes, a lot of pipes. Of course SNC-Lavalin just last year bought the crown corporation AECL (Atomic Energy of Canada Ltd.) for the token sum of $15 mln. from the Federal Government, without any strings attached. They are likely to make a lot of money on this, at least if the government does not hold them accountable for the inevitable huge cost overruns which, to date, is the norm. Here is the chart; 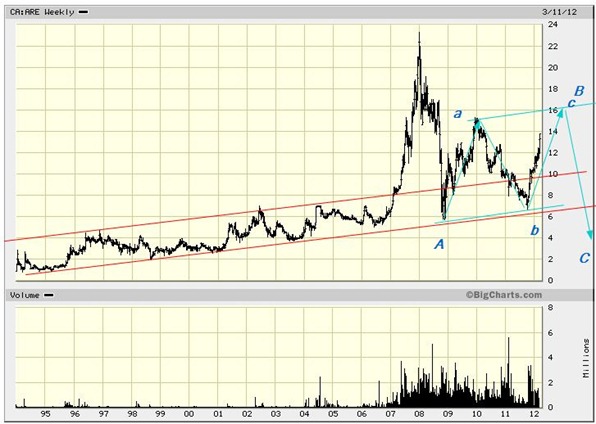 As with the DAX below, this stock has had an extraordinary robust rebound from the Oct. lows of last year and therefore it is prudent to consider the possibility that the B-wave was not complete after the initial rebound and is only getting there now. At this rate it wont take long to get to $16 before the stock goes down again, if it does. After all the stock was at $73+ back as recently as 1989, so it is conceivable that it is in a new bull market and that we are actually in wave 3 up. See below;