Markets have frustrated both bulls and bears no end. Some are up, others are down and most have gone sideways. In the meantime miracles happen every day. Greece, that was thought to be the dead man walking, managed to save the World economic system at least ten times if not more by not jumping straight into a financial inferno. First they have an immaculate default, where they tell investors that losing 75% of their money is voluntary and the ISDA agrees but only briefly. The triggering of after-the-fact “collective action” clauses was a little bit over the top even for them. When all is said and done Greece is off the hook for about 100 bln. owed to private investors and on the hook to the ECB, or its salvation fund, for new loans to the tune of 130 bln. That is a net increase of 30 bln, not including another 35+ bln. that is still forthcoming from the IMF. The country’s unemployment rate is running at about 22%, precisely the same level as in the USA if that country had not changed the way it counts these things. Spain and Portugal may not be that far behind. In the mean time Germany is enjoying the lowest unemployment in 20 years as well as very high levels of business confidence. Here is the EWG chart; 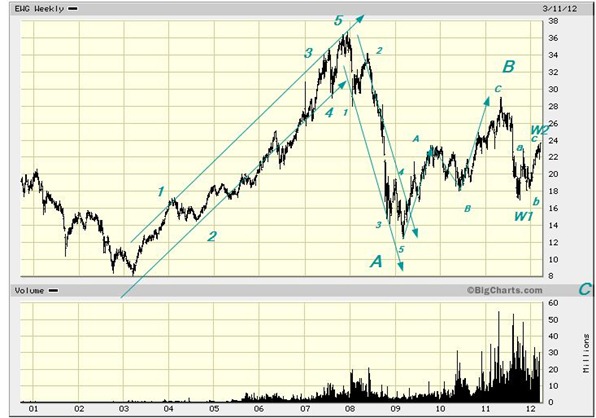 So far these iShares support the bearish view. The initial 5-waves down during the great recession, if that is what it is, suggest a zig-zag is unfolding in the form of a large A-B-C. In this case the intervening B-wave is particularly well proportioned. the c being vector equal, almost, to the a. In fact in terms of the relative size of the initial drop and the following retracement, the A and B waves are very similar to the W1 and W2 waves. Presently, at about $24 we are right in the middle of the range and wave 3 down (of C) could start any moment. The DAX itself sends the same message; 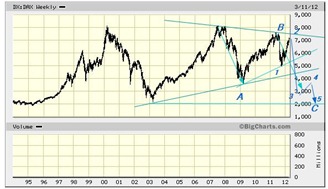 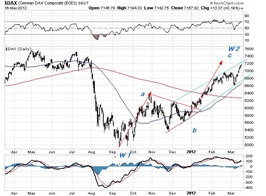 However, in the case of the DAX the absolutely unbelievable speed and magnitude by which the index has rebounded makes one wonder if B was ever complete. Since October last year this one is up an astounding 50+% and the possibility of higher levels, as with the DOW cannot be excluded.  This is not a preferred view. If , for instance one looks at the AEX, Amsterdam, the comparable level would be somewhere in the vicinity of 3000 on the DAX chart and yet the Netherlands have a far more open and global economy than the Germans and both countries are considered to be in the have category among the European peers. Perhaps the day will come that the market realizes that the have’s are already on the hook to the have-not’s by an amount  estimated at around 400 bln. Euros and growwing