See also Keynes in a previous blog. This fellow believed that the best rate for interest rates would be zero, which thought process seems to have been adopted entirely by Bernanke. Others, more correctly, believe that capital is just another economic input that has its own price, essentially where the pain of delaying gratification equals the joy of immediate consumption. No one knows where that equilibrium is at any point in time but history would suggest that it is above 2% in real terms, so about 4.5% Given that taxes take a big bite out of the return perhaps the equilibrium level should be a few percentage points higher, somewhere between 6/7% seems reasonable.

The notion that the Fed. actually controls interest rates has taken hold over the past few years despite evidence to the contrary. Remember the “conundrum” that we had a few years ago and now again, in the midst of operation twist long rates are actually going up not down. In truth it probable was only possible to have such low rates thanks to first Japan and later China, both of which had sound economic reasons to “sacrifice” return for exchange rate and trade advantage. So, for the sake of argument, assuming that the Fed cannot control interest rates, when might they start going up?

Charts are hard to come by but here is one of the US Fed. Funds rate, basically call money: 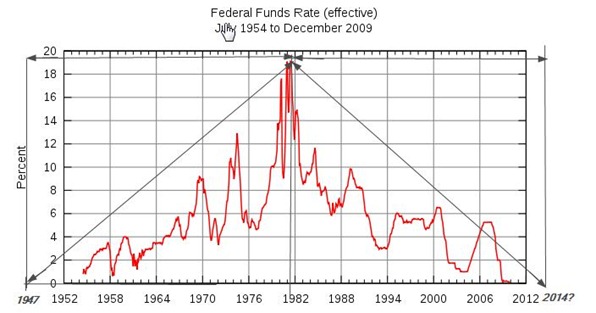 We know that the lows in interest rates came about a little after the second WW, say 1947. This was a time when all concerned would have wanted low rates simple to rebuild. Often, for reasons I do not understand, markets just love symmetry. Applied here one would expect that the period from 1947 to 1981, thirty-four years, would be repeated on the other side which would bring us to 1981 + 34 = 2015 give or take a year. 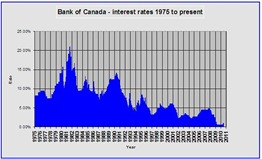 Using short-term (one year?) rates from the Bank of Canada (unfortunately I could not find a single chart) we get similar results. Low rates (1%) prevailed from 1947 to 1951. Let’s assume that the low was right in the middle, that is in 1949. It would then take 32 years to get to the highs of 1981, so in order to achieve perfect symmetry one should aim for 2013 for rates to turn, again give or take a year. Last year, to almost everyone’s surprise, long bonds were by far the best investment class to be in with an overall return somewhere in the order of 35%. Next year may repeat that performance, but chances are equally good that it will turn out to be the worst asset class.  By the way, higher rates would be good for a lot of different investors, but initially as rates start to go up the process can be double painful.