Everyday lately there are a number of stocks that make new all time highs. Some by huge amounts like AAPL, others only fractionally, but new highs nevertheless like Colgate-Palmolive. It certainly makes one wonder if we are still repairing the damage of the great recession three years ago, or are already embarking on the next bubble phase. Even some of the broad averages, such as the S&P are now within 9% of there all time highs and sporting decidedly rich P/E ratio’s.

Economics is a wonderful dismal science. The only one where the practitioner can claim , with a straight face, that the patient on his death bed is now feeling so much better, after an aspirin , that things are now even better than before. We see it all the time. If, for instance, employment numbers are good this is bad as it threatens QE3, and then, to save the day, Bernanke thinks aloud and expresses a wee little bit of doubt about the continuation of employment growth, and this , of course is good. Merkel achieves the same thing by announcing that the firewalls should be higher (bad?) and , like Pavlov dogs the traders in Frankfurt bid the DAX up (good?).

This brings us to the easy-money approach. The first practitioner that put theory to practise is undoubtedly a Scotsman by the name of John Law. This colourful fellow gambled away his considerable inheritance, killed a man in a duel, was sentenced to death, escaped and moved to France and Holland, got the ear of the Duke of Orleans, set up the first central bank in Paris, and died a pauper in Venice. Without getting into too much academic detail, suffice it to say that Law, Keynes, and Bernanke are all three basically cut from the same very-easy-money-is-very-good cloth. All three believed that the lower interest rates the better, always, not just in times of distress. All believed that there was no limit to how far you can go with creating money and all believed  it to always be beneficial to the economy, particularly to production and employment. Furthermore, in almost every instance there is a government, an exchange of paper (debt), and a deliberately created expectation of a promised land just around the corner. In Law’s case this involved land, the river delta of the Mississippi, that covered about 1/2 of the USA as it exists today. Arguable Law was almost as powerful a man then, as Bernanke is today! The stock of his Mississippi Company is shown below; 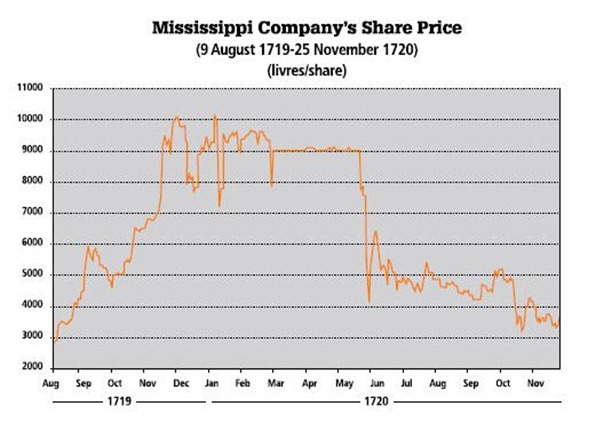 After a very prosperous period of about 7 years the stock peaked, reversed and then caused one of the largest financial calamities ever in France. In England the South Sea Bubble occurred at precisely the same time and, of course, had the same disastrous results. The question now is, “what if Bernanke has it wrong too????”.