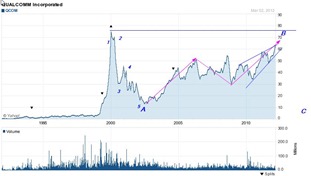 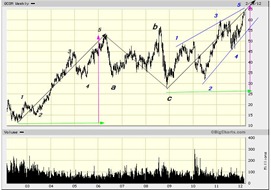 Qcom also just made a new high at $62.74. This stock has taken about 10 years to repair most, but not all, of the damage caused by the tech wreck in 2000/2003 ( see also our blog on the Nasdaq, which, almost to the tick, has recently retraced 62% of that drop). In this case the picture is absolutely perfectly clear, wave A down, followed by an almost perfectly symmetrical a-b-c B-wave back up, not quite getting to the double-top level. The c leg in this B-wave is almost certainly a “diagonal”, read wedge. It has not yet reached the upper trendline, which would be around $66. This is also approximately where wave c is equal to a in both time and amplitude (vector). The entire structure is a 5-3-5 , a-b-c. No reliable alternative counts present themselves. The stock has a p/e around 24. We would sell here or fractionally higher.

The ultimate target would be below the lows in 2003 by about the same amount as the stock fails to double top.