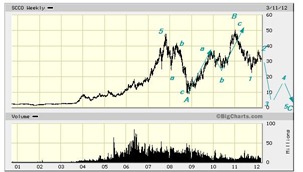 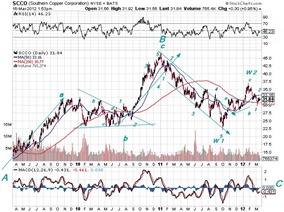 SCCO, Southern Copper caught our attention for the simple reason that it’s charts are perfectly clear. We had a peak in 2007, then crashed and spent the better part of two years coming right back and then some, presumable in a 3 part structure wave B, (but it matters little of you prefer a 5 wave wave 5). Now we are down almost 60% and back up again about 60%. We have probable just completed minor wave 1 of 3 of 3 of C. That means that the next wave will be wave 3 of 3 of C, which is precisely where the fun really starts.

Copper, just like a big wheel at Orange, never spent much time inside a university but nevertheless is credited with having a phd. in economics, and when it goes down presumable so does the economy, especially that of China. Hard landing / soft landing has been debated at least for more than a year now but recently we got JP Morgan Chase on the hard side plus a few other potentially explosive little items concerning the reliability of the stats coming from them etc.etc.

Nobody owns Southern Copper so why bother to comment on it? Simple put this stock is just one out of many that is following the same pattern, often the exact same pattern. Here, for instance are the charts of TCK.A and FCX 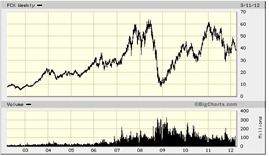 You can enlarge the charts and move them around to better compare them if you wish, but I am sure that there are some pretty clear similarities.