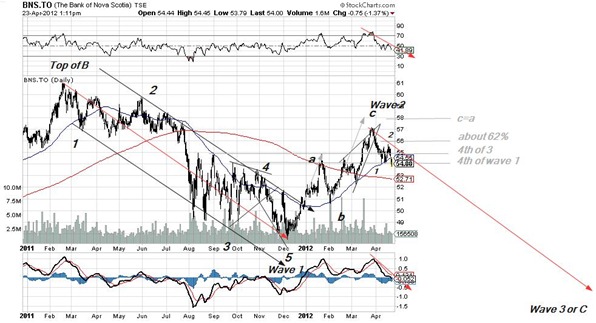 Bank of Nova Scotia did pretty well as expected (see older blogs), except that it just had to go to the highest reasonable possibility on the rebound. Having reached $57 it started to decline again and is about $3 off that level. The rebound is clearly an a-b-c correction and therefore it  follows that the stock should one day trade at least below the lows on this chart (and for the same reason but on a larger scale below the $25 level of March 2009). We now have overlap situations that essentially exclude any other count giving a great deal of confidence to this outlook. Obviously the view in Canada is that nothing of the sort can happen as our banks have an oligopolistic stranglehold and will simple keep adjusting their fees in order to keep the process going (they just abolished free banking for seniors). But nobody knows where the  growth is supposed to come from, interest rates could rise, the Volcker rule has yet to be implemented and the dependence on “wealth management” has increased at a time when wealth might actually start dropping. There are dozens of other reasons why banks may get hurt not the least of which is their uncanny ability to every ten years or so to find a hole to fall into. Not a time to own these stocks.

BNS is. of course, one of the better performers in Canada, perhaps because of it’s international scope. Even so a quick look at the long-term chart below makes the point; 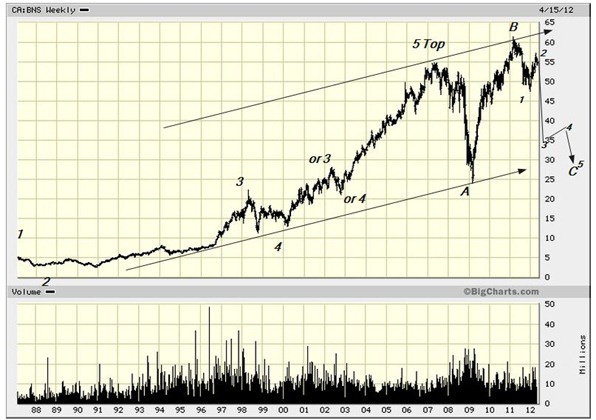 The high was at $61.28, and it made that high after the great recession. Still we think the “orthodox” top occurred in 2007, making this the top of a B-wave but either way the stock should revisit the $25 low. Over roughly 20 years and starting at $5 that would still constitute an annual compound rate of 8.5%, not including dividends!