Starbucks has a dividend yield of 0.68% and trades at a P/E of 36. Today it hit a high of $62 which caught our attention. It reported earnings that appear to be a tad disappointing at least as far as European sales were concerned and the stock is down a few dollars in after hours trading. Here is the chart with a count that is somewhat questionable considering a slight overlap, but we present it anyway; 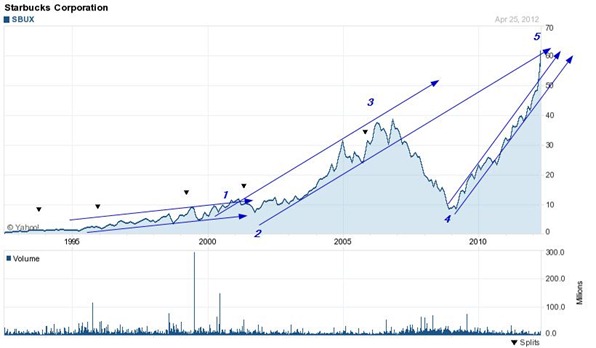 Back in April of 2009, after the stock had hit a low around $5/$8 and had already climbed to a bout $11 or so we recommended the stock as a buy but added that we had no idea why anybody would do so. Now that the stock is some $50 higher, not only do we not understand why one would buy it but we would definitely recommend selling it. The problem, of course, is that with interest rates at almost zero ANY asset that has a return has a theoretical infinite value. This is the free (you do not need to work for it) prosperity model followed by Bernanke et al. Even so the Fibo # of 61.8 may just have more weight this time around.